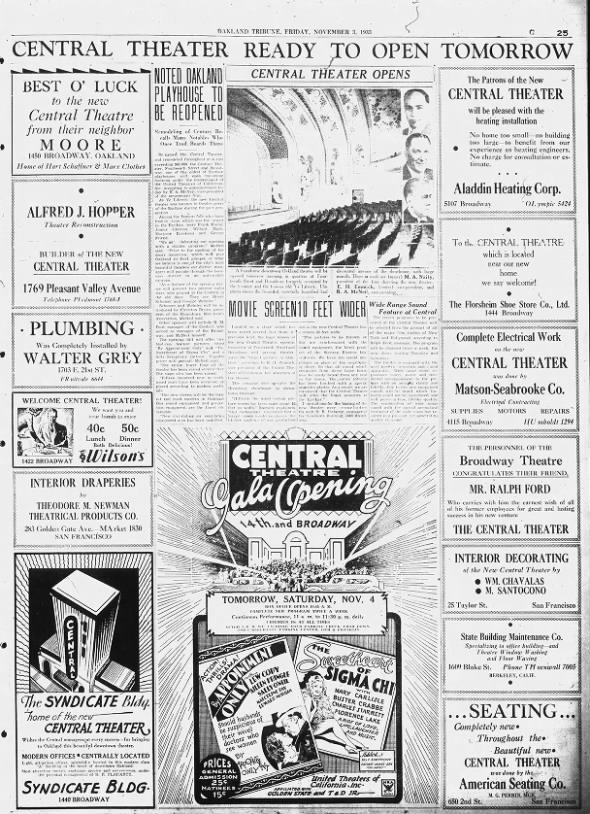 Curtain Coming Down for Theater

The curtain will ring down for the last time at the Central Theater â€" now a motion picture house but once one of Oakland’s foremost legitimate theaters â€" within the next three months the 1,500-seat auditorium will be ripped down and replaced with a parking lot. Five stores fronting on Franklin St. also will be torn down for the same $30,000 project. Henry Trevor, San Francisco real estate man and agent for the owners of the theater and other buildings, announced yesterday that the auditorium and store buildings will be demolished to make way for a 100-car, semiprivate parking lot.

Only the lobby of the Central Theater, fronting at 1424 Broadway, will remain standing. It will be converted into a store, according to Trevor. The theater opened as Ye Liberty Playhouse in 1904,
with Harry W. Bishop as manager. The first of the scores of legitimate theater productions on its stage was â€œA Bachelorâ€™s Romanceâ€. In 1933 the theater was converted for the exclusive showing of motion pictures and was re-named the Central Theater. The event was marked by a parade down Broadway. The Central has remained a motion picture theater since that time. It is now operated by United-California Theaters, Inc.

Twenty-one persons are employed at the theater, which is managed by Dick Scott. No closing date has been set. The new parking lot will front on Franklin St. Termination notices already have been sent to lessors of the stores on Franklin. They are the California Coin Shop at 1315 Franklin; Peck’s Cocktail Lounge at 1417 Franklin; Dr. Jonas Herman, optometrist at 1425 Franklin; the California Hearing Aid Center, 1429 Franklin; and the Chat and Chew Cafe at 1433 Franklin.

I remember the Central fondly as still a grand old place in the late 1950’s. Like the nearby Lux, it had a second run double feature policy with continuous showings starting at 10 a.m. Admission prices were low and presentation was very good. I remember seeing “Oklahoma!: there in 4 channel magnetic stereo sound and it looked and sounded nearly as good as it would at the Fox Oakland a few blocks away.

As a kid living in downtown Oakland, I remember the sputtering close of the Central. Open for a few weeks, then closed for a month or two, then open again. The entire drama was telegraphed by the theater’s huge marquee on Broadway. Hey, even as a youngster, I was paying attention to this stuff!!!