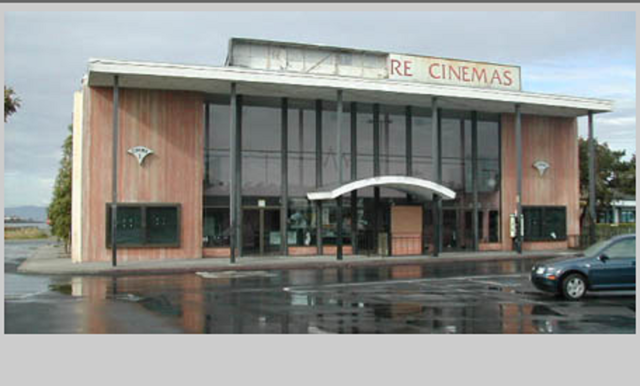 This twin screen cinema started as a Transcontinental/Lippert Theatre in the Alameda South Shore shopping center and it showed first-run fare. It opened on November 7, 1968 with Sidney Poitier in “For Love of Ivy” & Doris Day in “With Six You Get Eggroll”. Later it was operated as an independent under the name Southshore Twin Theatre.

The thing I remember strongest about this theater, was at least until the mid-1980s, the lobby (above the concession counter) had a bunch of posters of Robert Lippert-produced films hanging. I recall one for “The Fly” amongst a number of them for Westerns. This was a Lippert theater, so it was only fitting. Sometime in the mid-late ‘80s, the posters were removed in a remodel. I always wondered where they ended up.

There is part of a room devoted to Robert Lippert and his films at the Alameda Museum. They have several posters in there; perhaps some of them were once at the Southshore Twin.

I happened to drive by the mall the day they started tearing it down, and asked some of the kids working in the stores if they knew anything about it. They were all surprised to hear that the theater was being demolished; it had been intact when they came to work.

According to the website: View link this theatre was the first multiple screen theater built. It was built by Robert Lippert, long time Hollywood producer who retired from Hollywood in the 60’s and returned to his hometown Alameda, CA. I haven’t been able to verify, but that’s what this particular web site says

In a very short time a lot of errors can occur, people die or forget details, etc. I was hired on to open and manage the Showcase Twins. I left the managing job at the ‘flagship’ 70mm Briggsmore in Modesto, owned by Richard Mann. Mann and Lippert shared offices in S.F. and Lippert had a number of Drive-in houses in the valley. He hired me to run the Showcase, which opened around 1969. He also opened a small house in Rockridge Center, (Oakland) with played mostly art and foreign films catering largely to the Berkeley crowd. I later was district manager.

The ‘booyaka’ site info is a bit in error: The Showcase was not the first multi to be built, however it was the first,(in the country) to introduce the projection platter system, which was essential for multi screen houses. Lippert was originally from Alameda and also the owner of the old downtown house. He lived out in the Alamo-Danville area.

JCL,
If you see this post, pls let me know. I worked for the owners of the center when it was torn down (i was the one who brought down the main beam with an excavator). I was allowed to salvage what i wanted, and I was able to get old documents, some with Lipperts signature, insurance papers, blueprints, the two Cinemeccanica V* projectors, and some other stuff. I have since donated the two projectors to a collector and restorer, but kept much of the smaller keepsakes. I am very interested in anything you can tell me about the beginnings of this theatre.Thanks.

Glad to hear from you. Thanks for your info and request. I sent you a email via your above yahoo address, so please check and see if it arrived. Also check the ‘bulk’, as yahoo drops a lot of ‘unknown’ stuff in it. If nothing is there, you can contact me: I will gladly furnish info to you. Best,JCL

i remember going to see movies here all the time when i was a little kid i remember the last time i seen a movie here it was the karate kid 3 back in 1989 i also remember all the old movie posters in the lobby it,s a vacant lot now i missed this old spot.

heres a link to the southshore twin in 2002 right before it was demolished..

This opened on November 7th, 1968. Grand opening ad in the photo section.

This was never a National Amusements theatre. This was a Transcontinental/Lippert Theatre.