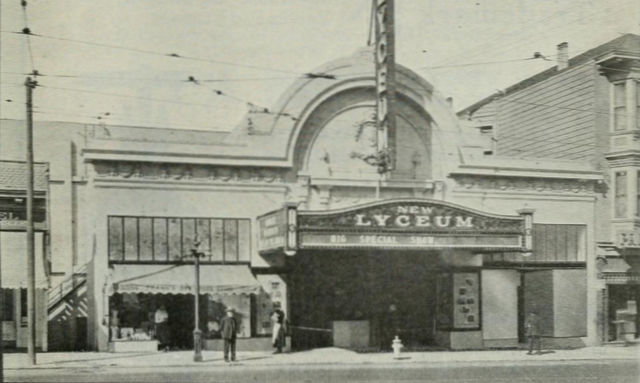 The Lyceum Theatre opened in mid-1907, with vaudeville and motion pictures. By the late-1920’s it was featuring Vitaphone Talking Pictures, and remained a popular low priced, late run house for patrons of the outer Mission district for the next twenty-five years.

Like so many other secondary houses, it was one of the first to feel the impact of television in the early-1950’s, and, after several closings and re-openings, became the temporary home of the San Francisco Revival Center, before they moved to the former State/Del Mar (q.v.) which they then made their permanent home.

The Lyceum Theatre was subsequently torn down, and a supermarket built on its former site.

The theatre was demolished and became a Safeway store in the 1960s.

This photo from the SF Public Library was taken in 1948:

This is the same Tillmany photo as above but larger and thus more detail:
View link

According to this church site, the church moved first to the Del Mar, then to the Lyceum in 1953, then back to the Del Mar in 1955, which became the permanent location.
http://www.sfchristiancenter.org/about.html

My aunt took me there once when I was a little girl. If Bette Davis went in there she would have said what a dump. It was full of people that kinda looked hard on their luck. We were both itching terribly afterwards and when I got home I had little bumps on my neck and my mother was furious. She called and raised hell and they told her that the exterminator was coming in, and offered her a couple of free passes. She yelled at him to save his passes and take the money and spray the damn place. Never went there again.

The list of projects by various California architects slated for 1920, published in The Architect and Engineer of December, 1919, included in its entry for Reid Brothers a $90,000 project at Mission and 29th for the Lyceum Theatre Company. I’ve been unable to discover if this was to be a major remodeling of the existing Lyceum or if it was to be a replacement for the 1907 building. $90,000 would have been a lot of money for a remodeling job.

I’ve been unable to find confirmation that the project was carried out, either. Jack Tillmany doesn’t mention the project in his book “Theatres of San Francisco,” though there’s a photo of the Lyceum. Judging from the cars on the street, the photo appears to have been from after 1920, but theater’s facade still looked more like it was from 1907 than from 1920.

The November, 1920, issue of The Architect and Engineer has an advertisement for a San Francisco roofing company which is illustrated by a photo of the New Lyceum Theatre. The text attributes the design of the house to Reid Brothers.

San Francisco Chronicle for October 20, 1920 has a story announcing the grand opening program the following day of the New Lyceum, operated by Robert A. McNeil, Charles Moser and W.G. Bailey, seating 1,750.

Even though first opened in 1907, the Lyceum did not make it into the 1914-1915 American motion Picture Directory, indicating that it was probably not a significant theater. I suspect this to be one of those cases in which a neighborhood nickelodeon-style house was later expanded by having a new auditorium built at the rear (the 1920 project by Reid Bros.) and the original auditorium converted into a lobby and perhaps some commercial space.

Historic aerial photos of the neighborhood show the Lyceum’s large auditorium at right angles to the entrance building. The new auditorium looked to be about 90 feet wide and 140 feet long, and there was a small stage house probably sufficient to accommodate some modest vaudeville acts. The original theater building was about 50 x 90. The Lyceum was still standing in a 1956 aerial view, but was gone in a 1968 aerial, replaced by the parking lot for the new shopping complex that backed up to San Jose Avenue.