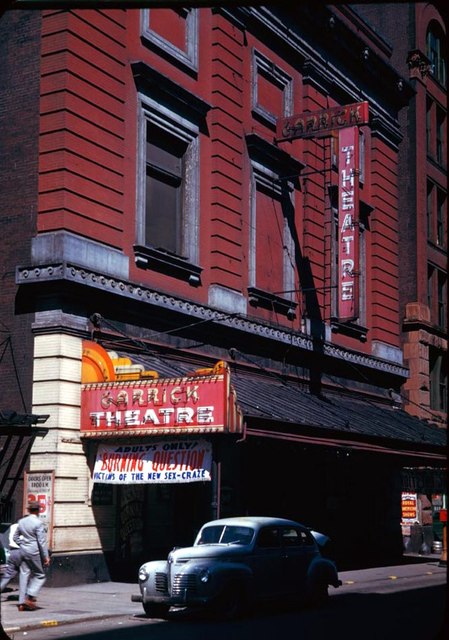 The 1904 World’s Fair brought thriving commerce and tourism to St. Louis. It was also the reason many famous building’s such as the lavish Jefferson Hotel, were built. And in the year of the World’s Fair, the Garrick Theatre was erected at a cost of $350,000.

By no means a major movie palace, this theatre, built before the silent films became popular, was a legitimate playhouse which opened December 25, 1904. Named after famed actor David Garrick, this theater at 515 Chestnut served as a playhouse until World War I. What puts the Garrick Theatre on the “map” among other theaters is the Shubert Brothers' involvement. The brothers also managed the Sam S. Shubert Memorial Theatre at the corner of 12th Street & Locust Street and the Shubert Theatre on Grand Street which later became the American Theatre and then the Loew’s Mid City Theatre.

Located between Broadway and 6th Street in the heart of downtown, the Garrick Theatre sported a distinctive turn-of-the-century facade. Its heavy stone front featured arch doorways. Although the facade wasn’t extremely ornate, it was attractive. The modest marquee read merely “Garrick Theatre” on each side. The theater was small: it had a 65 foot front and extended only 125 feet back.

Thanks Brian, now I know how
JamesGrebe

Loews ran it for just over two years strange.

In 1899 the Garrick’s architect, William Albert Swasey, designed a building for the Masons at 1042 N. Grand Avenue, which included a theater that operated as the Odeon for over thirty years. I’ve been unable to discover if the Odeon ever operated as a movie house, though. Does anybody know? It would have to have been before 1936, the year the building was condemned and demolished following a major fire.

Here is a biographical sketch of W.A. Swasey from the Landmarks Association of St. Louis. It mentions the Garrick as well as the Odeon, but only briefly.

The Odeon on Grand was primarily a concert/recital hall which occasionally presented a film. When the Municipal Auditorium (the future Kiel) opened in 1934 and the Symphony moved its concerts there, a policy of movies and stage shows for Black audiences was attempted, but was unsuccessful. A fire in late 1935 led to the building’s condemnation and demolishment.

kschneiderstl: Liberty was an early aka for the house listed at Cinema Treasures as the Sun Theatre.