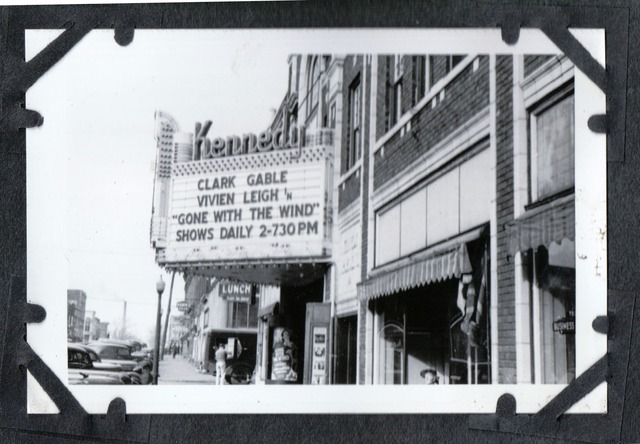 Located at S. Elson Street & W. McPhearson Street. Built and opened in downtown Kirksville on March 26, 1926 with a seating capacity of 1,122. The Kennedy Theatre was operated by Fox Midwest Theatres in the early-1940’s. It was a thriving theatre until the time of the multiplexes in the nearby malls more or less put it out of business.

I attended College in Kirksville during the 1970’s and early 80’s. My girlfriend worked the ticket booth at the Kennedy and I use to go to the “show” a lot!. I remember seeing a re-release of Gone With the Wind, the only time I have actually seen it in a movie theater. The Kennedy was the only game in town and an easy walk from campus. I well remember MRs. Brown and the B and B record show just up the street.

Since three of the corner lots have been demolished for parking, the theater was on the SE corner. You can see the Princess and post office in the background of the main photo.

The August 2, 1924 issue of The Reel Journal had an item about a planned theater in Kirksville that might have been the beginning of the Kennedy Theatre project:

“Kirksville, Mo., is to have a new motion picture and vaudeville theatre if present plans mature sucessfully. The deal is now being financed. Plans for the new house have been prepared by R. Levine & Company of Chicago. The new theatre will have accommodations for 1200 spectators and cost upwards of $175,000.”One reason I suspect that this item was about the Kennedy is that one of the architects who frequently worked with R. Levine & Company during this period, Edward P. Rupert, designed a few theaters with styles and details that closely resemble the Kennedy, most notably the 1924 Washington Theatre in Quincy, Illinois.

A document from the Missouri Office of Historic Preservation credits local architect Irwin Dunbar with the design of the Kennedy Theatre. While it’s possible that Dunbar only acted as supervising architect for the Levine Company, it’s also possible that he did design the theater. He had designed the Princess Theatre for the same owners a little over a decade earlier, and he designed some local churches and office buildings that are quite as good as the Kennedy.