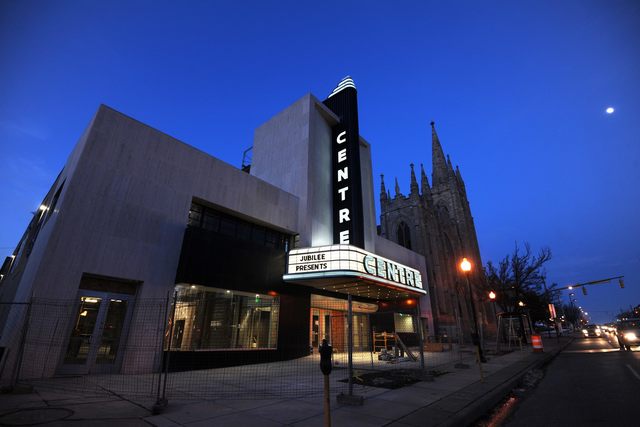 The Centre Theatre opened on February 2, 1939 with Loretta Young in “Kentucky”. This was a really amazing theatre which was part of a complex that included a studio theatre in addition to the main hall and the broadcasting center of WFBR radio. It was the first theatre in the city equipped for radio broadcasting in-house (other theatres had broadcast via remote before) and the first with the ability to project live television on the screen.

It was renamed Film Centre on August 18, 1954 and closed in 1959. Although the main auditorium was long ago converted to office space for the Equitable Bank (Itself now long swallowed by mergers), the beautiful lobby with “heroic nudes” (according to opening night literature) is more or less still there. The studio theatre is still there, although WFBR moved out a few years ago, and is being used as a storefront church (this section opens onto 20th Street). The exterior is in fine shape, the Moderne styling has not been changed at all and the marquee is still there.

After closing the building remained in excellent condition, and while lettering had been removed, the old vertical tower still stands. In 2015 it reopened as a performing arts centre

Here are some photos:
http://www.kilduffs.com/CCA.html

Looking at the Google photo, it doesn’t appear that there is any effort being made to re-use this theater. There is a nice looking church next door, so that neighborhood can’t be that bad. Someone owns the building and is content to let it sit unused, I suppose.

Lost Memory, Thank you so much for posting that excellent photograph of the Centre Theatre surrounded by great memories of the landscape, such as; the No. 13 streetcar (I remember so well). At this theater, I remember seeing “Around The World In 80 Days”, “Oklahoma” and one or two other great movies. I remember “The Shrike” (I missed it) was also screened there. One of my biggest fantasies is to travel back in time with a high-end camera and take multiple shots of each Baltimore theater (and it’s architectural surroundings).

Does anyone know who owns it now? I am going to school right down the street and i am interested in reactivating the space. Does the city own it?

Theres nothing inside. Its all offices now and is in terrible shape. The roof is collapsing and the whole place is full of mold. If it werent for Cinema Treasures you wouldnt even have known it used to be a theater.

The Centre is nearing renovation and will be reopened as a performing arts center, with the help of the Maryland Institute College of Art (among others). Article from three years ago:

Also a March 2015 article about the reopening.

This reopened as Film Centre on August 18th, 1954. Grand opening ad in the photo section.