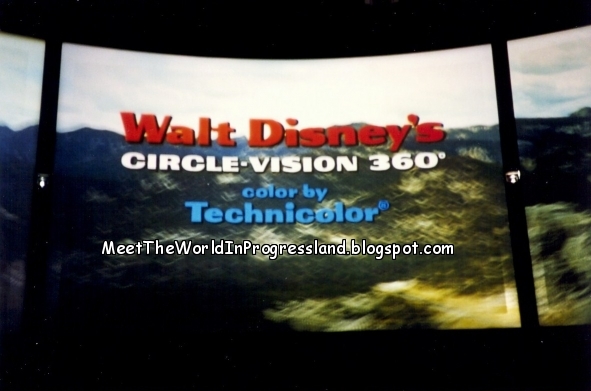 Located in Tomorrowland, in Disneyland. Circarama opened on July 15, 1955 screening “A Tour of the West” across 9 large screens for a panaramic view of the movie. The audience stood in the center of the auditorium. It was renamed Circle-Vision 360 in 1967. Closed on September 8, 1997 with “America the Beautiful”.

There’s been some confusion about Disney’s 360-degree film formats – the original format that opened in 1955 with A TOUR OF THE WEST, which ran until 1960, and then with AMERICA THE BEAUTIFUL until 1966, was an 11-screen, 16mm format (in 360 degrees) called CIRCA-RAMA. When Tomorrowland was refurbished in 1967, with a new version of AMERICA THE BEAUTIFUL, the 360-degree film format was now a 9-screen, 35mm format (in 360 degrees) called CIRCLE-VISION360.

The original 16mm Circarama camera is on display in San Francisco at the Walt Disney Family Museum.

More info, as well as patent drawings of Circa-Rama that were submitted by Disney – http://www.yesterland.com/circarama.html

Theatre showing O Canada en Français and in English at

Pan around this video.

Correction. this was at Epcot. Same experience here. Other Disney 360 theatres were built in Brusells and Montreal.