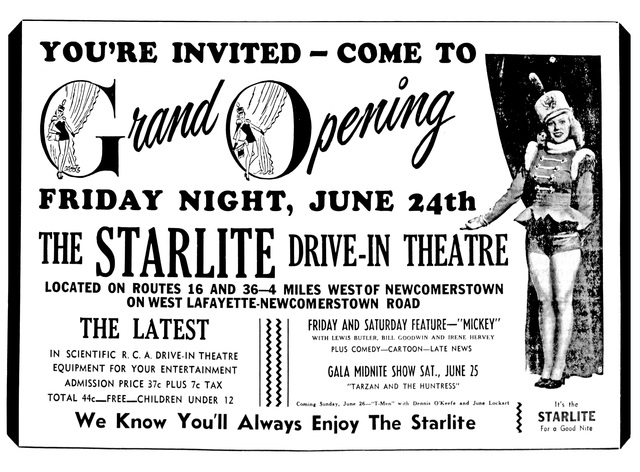 The Starlite Drive-In grand opening was on June 24, 1949, screening the 1948 Comedy/Drama “Mickey” with Lewis Butler, Bill Goodwin and Irene Hervey. It was opened by Oliver G. Ortt and Ida Mae Ortt. Later on in October 1949, C. E. Ortt and J. H. Ortt received a part interest in the drive-in theatre. Supposedly the first screen tower was wooden with a canvas screen. It was reported to have caught on fire in the early-1950’s. The ozoner could park 300 cars and used RCA sound equipment. George A. Manos and Tommy G. Manos, (dba Mano Amusements, aka Manos Theatres from Toronto, Ohio) bought the Starlite Drive-In on January 5, 1950. Included in the deal was the Ritz Theatre in Newcomerstown. On July 14, 1954, Tex Ritter who was one of Hollywood’s top cowboy actors at that time made a personnel appearance at the Starlite Drive-In.

On March 10, 1955, a tornado hit the town of Newcomerstown and did considerable damage to the Starlite Drive-In. It blew down the screen tower, damaged the concession stand and blew down some fencing. A new concrete block screen tower was built by the Albert Construction of Coshocton. George W. Underwood Sr. painted the Starlite name on the new screen tower. It reopened on April 1, 1955. One interesting thing to note on the reopening movie advertisement was the comment “see a show on canvas”. Apparently, the new screen tower was not completed yet so they used canvas to screen movies on. The Starlite Drive-In got transferred to Estella Sideris, (aka Estella Manos, wife of Antonio Sideris) on July 6, 1967. They were from Richmond, Kentucky. George A. Manos was having big tax problems in 1965 and maybe that is the reason they transferred the Starlite Drive-In in fear of losing it. Sideris’s (dba Coshocton Drive-In Theatre Amusement Inc.) did get a foreclosure suit filed against them on the property in December of 1967.

They owed $4,794 for property taxes on the property going back to 1957 when George A. Manos owned it. It was paid off in March of 1969. In 1968, the Starlite Drive-In and Elm Lane Drive-In were operated by Hebert H. Horstemeier (dba H.H.H Enterprises of Cleveland, Ohio). After the closing of the Elm Lane Drive-In in 1971, the only Manos drive-in left operating in the area was the Starlite Drive-In under the ownership of Antonio and Estella Sideris. The Starlite Drive-In continued to screen movies under the stars until 1986 and closed at the end of season for good. WNY Theatres of Buffalo, NY operated the drive-at until the end. Antonio and Estella Sideris sold it to Kenneth Porcher on August 18, 1986. The drive-in was demolished on January 28, 1987, by the same company that built the screen tower in 1955, Albert Construction of Coshocton. This fact is sort of ironic. Porcher developed the property and built single family homes on it with the Starlite Drive running down the middle of it.