The land of George T. Shepherd became home to Oklahoma City’s first enclosed shopping center announced in 1963 as Shepherd’s Plaza. The “L”-shaped mall had 725,000 square feet and attracted downtown stalwart J.C. Penney’s and Kerr’s leading to retailers leaving downtown and moving to suburban plazas. It opened theatre-less in September 1964. Announced on January 9 1966, the theater was operated by Earl Snyder and John Ashley. The Shepherd Twin opened on May 25, 1966 with Jason Robards in “A Thousand Clowns” & James Garner in “A Man Could Get Killed”. The theatres each seated 550 patrons for a total seat count of 1,100.

Marge Snyder owned the theatre after Earl’s death until selling it to Bill Warren’s American Entertainment (AE) in 1979. In 1982 Commonwealth acquired AE from Warren taking over the Shepherd Twin on June 5, 1981. United Artists acquired the theatre in 1989 from Commonwealth Theatres. UA closed the theatre on September 3, 1989 with a double feature of “Indiana Jones” and “Star Trek 5” and “Wired.” It also shuttered its Quail Plazam2, Reding 4, and French Market aging locations as it wanted to concentrate on 6- and 8-screen multiplexes instead of twins and aging quads.

This was owned by Bill Warren’s American entertainment from the 1970s to May 1982.

This was the first theatre in Oklahoma I saw a movie in. It was The Gnome-mobile in 1967. My central Florida family was in Norman for about six weeks at the time. Had no idea I would come back in 1970 permanently. Saw many movies at the Shepherd Twin until it was no more. I, too, would very much like to see photos of the theatre.

Random memories of managing the Shepherd Twin: Started there the week before Memorial Day, 1985. The Gods Must Be Crazy was playing (to an empty room, unfortunately), the next week A View To A Kill (Roger Moore as James Bond) opened on the holiday, by far the biggest film to play during my short tenure. In fact, it was the only film to draw a crowd that summer, all other bookings went downhill after Bond (and Grace Jones!).

The theatre had a trio of senior citizen employees who had all been working at the Shepherd since the theater opened! They were extremely set in their ways, having lasted through dozens of previous managers. I brought in a couple of excellent assistant managers, from my previous Commonwealth assignments, who were a tremendous help.

The capacity of 2,200 listed above – doesn’t match my memory, perhaps the two rooms combined might make 1,100? They were long, narrow rooms with a center aisle. Curtains that were not used. And the marquees shown in the 1976 photo above were gone by the time I arrived in ‘85. The Shepherd was a historic venue for the city, but it was dead in the water by 1985; 2-screen venues were financially no match for the burgeoning 6 and 8 plexes coming on line in OKC. I was last in the theater when the auditoriums were stripped to bare walls and dirt, remodeling for flat flooring, in the mid-1990s. Haven’t been back to the mall since then, but I do have fond memories of my short time as the theater manager. I only wish I had taken photos! 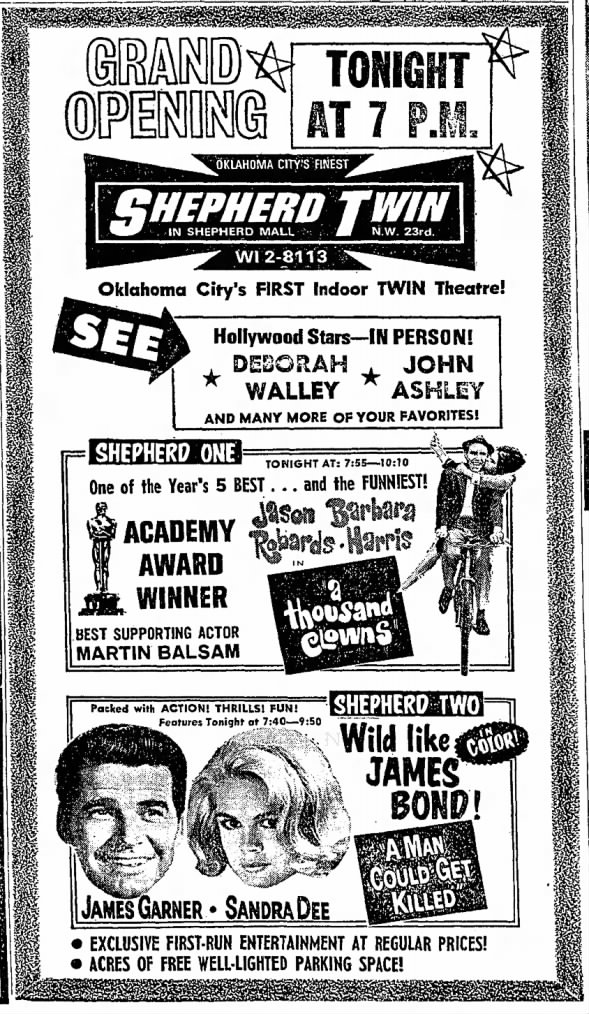