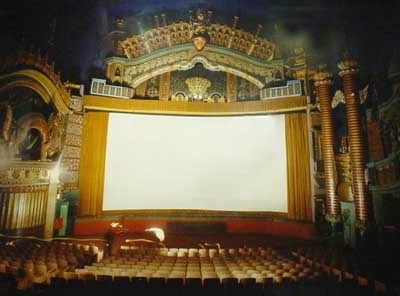 Opened on 10th September 1945 with Maria Felix in “Dona Barbara” (the planned opening film was Loretta Young & Alan Ladd in “China”, but the print didn’t arrive at the theatre in time). Cantinflas & Maria Felix were among the many stars appearing ‘in person’ at the inauguration. The Gran Cinema Teatro Elizondo was one of many spectacular cinemas to open in Mexico. The building was designed by architect Aturo Oliver Cedeno and the exterior was in an Art Deco style. Seating was provided on orchestra and balcony levels in the auditorium which was decorated in an eleborate Atmospheric/Indo-Chinese style, the work of interior designer Don Jesus Diaz Jimenez who collaborated with the artist Pedro Martinez.

It was closed in 1978 and demolished in 1982 and the site is now the Fountain of Neptune in the Macroplaza, the largest public square in Latin America.

It was a genuine architectural jewel in northern Mexico. Its ornamentation was influenced by Chinese and Art Deco elements, It had unique sculptures of dragons, nymphs and Budhas and its curtains of red silk, the red carpet and seats gave it a touch of luxury. It is a shame that it was demolished in the edification of the Macroplaza of Monterrey in 1982. Photographer Fausto Tovar took a series of pictures that bring us one of the last few memories of this majestic thater.

Photos of this theater can be seen on the following link:
View link

Absolutely magnificent! So sad that this unique movie palace was demolished in such recent times.

What a screen. It looks like 70mm, it must have been some place. Whoever decided to tear this down should have been shot.

It was a genuine architectural jewel indeed!
it was my favorite movie theater and spent many sundays there when i was a kid. the pictures bring a lot of memories.
I always thought that it was going to be relocated somewhere else
but that never happen.
but i still would like to know where all the sculptures of dragons, nymphs and Budhas go?