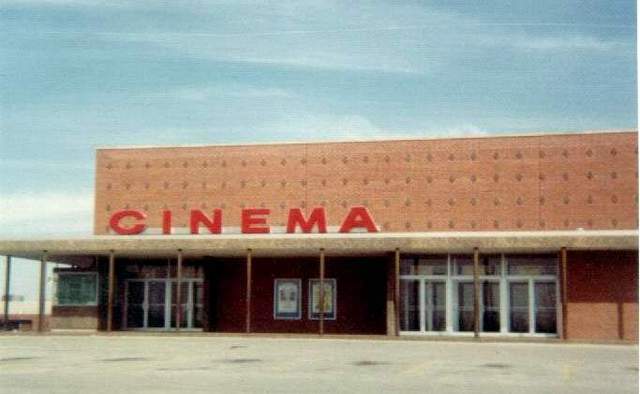 Opened May 7, 1965, the Ellisville Theatre was one of the first Arthur Theatres chain to be built in the suburbs of St. Louis. A single floor theatre all brick building, It had an attached box office. It was located at the end of a stip shopping center. Ellisville was a fast growning suburb with large homes being built all around the theatre. It was located on the main thorough fare of Manchester Road and Clarkson Road. At one time this area was all farm land.

The theatre was ultra modern and innovative also. The theatre seated 1,028 with plush rocking back chairs. The color scheme was an aqua color with a curtain that covered the very large screen. In March 1978 the theatre was twinned and divided right down the middle. The screens could never compare with what the original theatre had and they were just mounted with masking around them, no curtains.

The building is no longer there. The First Community Credit Union stands in its place.

I worked there in the box office and concession from 1973-1977. How I rued the day we added the cotton candy machine. I’d go home at night with cotton candy stuck in my hair, my clothes, up my nose. It was like being heavily sprayed with a can of Final Net.

My sisters also worked there, and my oldest sister and the ushers used to ride the popcorn bin down the aisles of the theater after closing. The first day I started there the movie was “Something Big”—a Western, and I had to wear a pin on my shirt that said, “Smile for Something Big”. Generated a lot of wisecracks, too. On breaks we’d sit in the back and watch the show and eat popcorn soaking in ‘butter’—I know the words to all the Elvis songs cause I saw “Elvis Live” about 100 times.

If you have any pictures, I’d love to see them!

Publicity at the time claimed 1100 seats.

In addition to the Ellisville the Lewis & Clark also ran “Sound of Music” hardticket, but only 12 weeks. Both theatres began their engagements the same date.

The Ellisville was operated by Arthur Enterprises until July 1977 when, being a reported five months behind in rent, they were nudged out by the theatre’s owner.

In October 1977 Wehrenberg took over operation of the house. In March 1978 the house was closed and was converted into a twin house, reopening in April.

Final night of operation was January 12, 1986. Bill of Agnes of God in one auditorium with Santa Claus-The Movie in the other.

I worked there when I was 16 to 18. So the time frame would be 1971 / 1973. The manager was this old guy that never smiled. We had a guys and girls changing rooms upstairs. The guys turned theirs into a sort of lounge to hang out during breaks. I worked mostly as an Usher, but also did the Ticket Booth. I never worked the Concession â€" back then it was usually girls that worked the Concession.

There were Rectangle Chrome Frame benches in the lobby with green cushions.

Many of the movies had quite a lot of people.

I remember sometimes hanging out behind the screen… the screen and speakers were huge.

There was a HUGE lighted sign by Manchesterâ€¦ we had to climb a ladder up to the sign and stand on a platform putting letters up with a stick. Not a place for people afraid of heights.

I also worked the Brentwood and Manchester Cine’s.. They too are now gone.

Didn’t get to go there before the twinning. But, I still have lots of good memories, including a first-run of “Dracula” (on Friday, July 13, 1979, nonetheless!), the 1978 re-release of “Star Wars” and a second-run of “Raiders of the Lost Ark.”