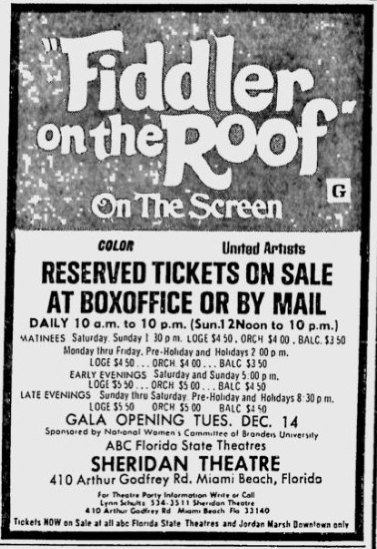 The Sheridan Theatre was opened on January 15, 1937 with George Brent in “Gods Country and the Woman”. This theatre was one of a chain of Florida State Theatres (later ABC Paramount). I remember little about this theatre, as I was growing up in Miami. I believe it was a fairly large house and it converted to roadshow films in the 1950’s (e.g. “Around the World in 80 Days” and “Oklahoma”.) I remember seeing a reissue of “A Star Is Born” (1954) and the theatre projected the CinemaScope film onto the huge Todd-AO screen. It was closed on September 17, 1972, but briefly reopened in February 1973 screening “Deep Throat” only to be closed down by the authorities. I believe the theatre became retail space in the 1980’s but was demolished in the early-1980’s.

Posted a picture of my father doing the opening of Around the world in 80 days ( boy the movie titles were long back then) with the searchlights for the opening at the Sheridan. 1956.

Seventy-five years ago today the Sheridan premiered “Gone With the Wind.” (The Sheridan was the only theater where the film opened on that date despite erroneous Internet claims of a nationwide release commencing on that date.)

Coate…Perhaps you haven’t checked the Uptown {DC} page lately, but you may have provided your own erroneous internet claim.

patryan6019… What does that have to do with “Gone With the Wind” or the Sheridan?

Coate…It doesn’t, other than to make you aware of perhaps inaccurate information you have posted that needs addressing. Besides, what does a not quite complete list of Circus World engagements have to do with the Uptown specifically. I apologize to the Sheridan page for being off topic, though there’s been no activity on it for more than a year. Over the last 10 years how many inaccuracies on CT have you made others aware of. So just between us (because, most likely, no one else cares or even knows)— was there a run of CW in Cuyahoga Falls-Akron that interrupted Mary Poppins?

dmtyler, Al is absolutely correct. The Roosevelt did not start venturing into blue movie fare – at least on a full time basis – until the late 1970s. (Further visual evidence below) The Sheridan remained shuttered after “Throat” for a good 7 or 8 years and was the victim of some fires as well. Around the early 80s, the structure was gutted and Centrust made this a large branch office.

[With apologies for dragging this further off topic…]

What does a not quite complete list of “Circus World” engagements have to do with the Uptown specifically? It’s related, in my opinion, since the Uptown was one of the venues in which it played, and I thought that by posting the (mostly) full list provided a more informative answer for the guy who had asked the question. (Though I wasn’t prepared for the guy’s obsession with dwelling on how short the Uptown’s run was!)

Returning the conversation back to the Sheridan… here’s the link to my “Gone With the Wind” article that cites the Sheridan run. 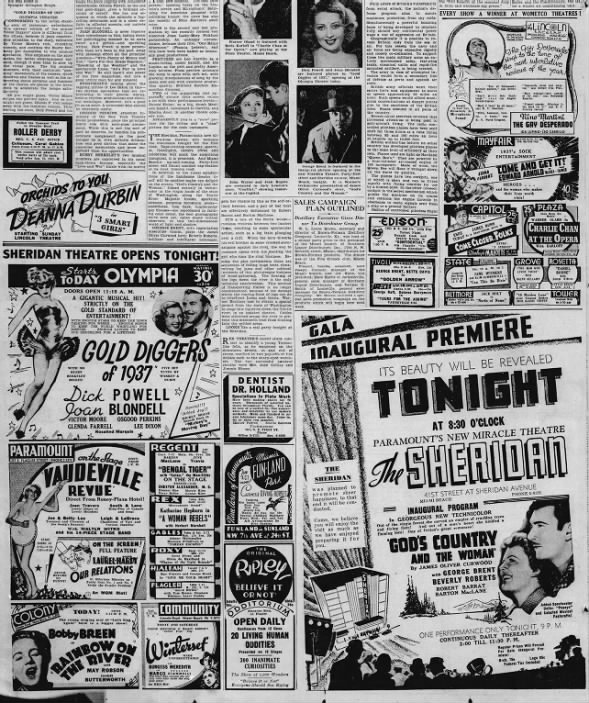 Closed Sunday September 17th, 1972. Reopened briefly in 1973 to screen the infamous “Deep Throat” and then was subsequently shuttered again after running afoul of local ordinances in February 1973.

The theater was demolished sometime in the early 1980’s after remaining dormant for about 7 years. The structure that replaced it became the Centrust building and later the Sheridan Center and what it remains today. The site has never been retail oriented since - or before - the theaters demolition. Only financial and medical services