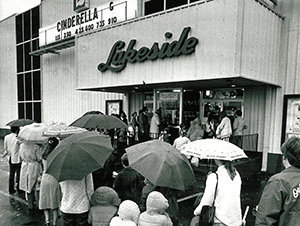 Not to be confused with the Lakeside Cinemas at 3301 Veterans Memorial Boulevard. The Lakeside Theatre was opened on August 5, 1965 with Marshall Thompson in “Clarence the Cross-Eyed Lion”. In 1970 it became the Lakeside Theatres 2 with seating provided for 952 & 526. In 1975 two more screens were added. It was closed in 1997.

It closed in 1997. The Lakeside Cinema in the mall across the street closed in September 2000.

The last movie I remember seeing at Lakeside Theatre #1 was the 20th anniversary 1997 re-release (with enhanced effects) of the original Star Wars. I believe it closed shortly after that run. I don’t recall if the other three theaters were operational during this last period - something tells me they had already shut down when the Star Wars re-release happened (sort of a last gasp of the franchise).

In the picture above, I remember seeing John Carpenter’s The Thing and Terry Gilliam’s Brazil at Theatre #2 - at least 4 times each. Great times. Crappy sound system, but great memories.