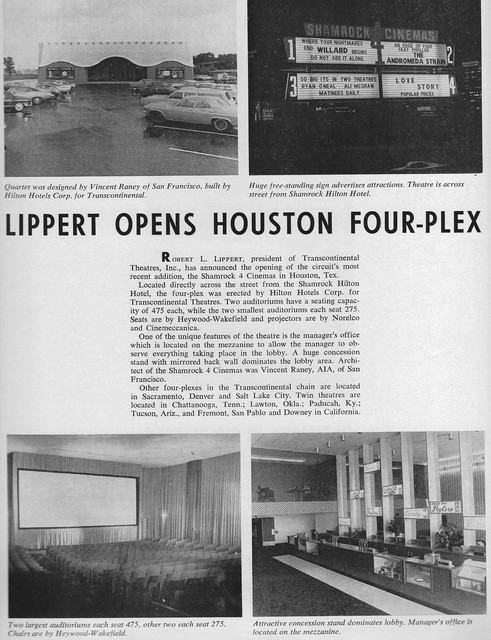 Located directly across the street from the Shamrock Hilton Hotel. Built by Robert L. Lippert’s Transcontinental Theatres in 1971, it opened on July 14, 1971 with Ali MacGraw in “Love Story” on two screens, with James Olson in “The Andromeda Strain” in screen 3 & Bruce Davison in “Willard” in screen 4. Four auditoriums, two with 475 seats each, two with 275 each. Seats by Heywood-Wakefield, projectors by Norelco and Cinemeccanica. Architect was Vincent G. Raney, AIA, of San Francisco.

It was taken over by AMC, becoming a 6-screen theatre which closed in 1986 due to flooding. It was demolished for a parking lot.

The Shamrock launched July 14, 1971 with “Love Story” on two screens, “The Andomedia Strain” and “Willard.” AMC took on the Shamrock converting it to a 6-screen facility. It closed in 1986 due to the flooding which also ended the Shamrock Hotel across the street. Both were razed later that year.