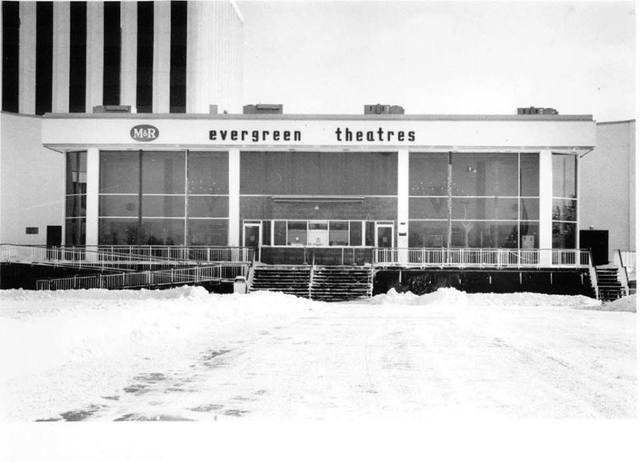 Was in the Evergreen Plaza Shopping Center in Evergreen Park. The twin-screen Evergreen Theater was opened on June 26, 1964 with Sean Connery in “From Russia with Love” & Tony Curtis in “Wild and Wonderful”.

I very vaguely remember this theater, if just for seeing its name in newspaper ads. Does anyone remember if this was a Cineplex Odeon, or a Loews theater? I thought it did get into the hands of one of those chains, and wouldn’t be surprised if they chose to close this theater, as a result of their merger in the late 90s.

It was originally an M&R Theatre, then it became a Loews Theatre in the late 1980s. And then………with the big merger; it became a Loews Cineplex Theatre and closed in the summer of 1999. It later got demolished.

Ah, okay. For whatever weird reason, I was thinking it was C-O that eventually took control of this theater, but I see it wasn’t. Thanks for answering.

Wow, sad to hear about this. I saw the first run of Up In Smoke in this theater.

Grand opening ad uploaded in the photo section for this theatre.

I only went to this theater once, as I lived nowhere near it, but it’s a fond memory. Saw “Taxi Driver” when it first came out, and the theater was still a twin. The other side was showing the Elliott Gould movie “I Will… I Will… For Now”.

very fond memories of the old Evergreen Plaza theatre. saw ALIENS there with dad, and in high school me and my friends would be there every Friday of opening night for the Halloween/Nightmare on Elm Street sequels. my last good memory was seeing The Blob remake on my day off from working at Evergreen Aqua. it was a huge theatre and it was awesome. Good times!