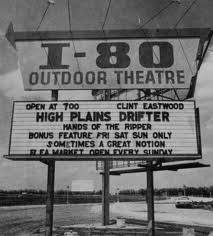 This drive-in, which was built for the Essaness chain, opened May 28, 1971 with a single, large screen. It originally had parking for about 1,200 cars and was located, as its name implies, off Interstate 80 at Harlem Avenue. It closed in 1987.

One of the reasons for this drive-in’s closing was its proximity to the World Music Center outdoor concert venue (today known as the Tweeter Center). The nearby night-time concerts would often be as loud or louder as the sound of the movies being shown.

Today all that remains of the theater is the concession stand; the screen tower and projection booth have been demolished. A flea market operates on the site, as it has for many years now, and a car dealership has also acquired a portion of the former drive-in property.

They had in-car heaters which was essential in the frozen wasteland of Chicago. I escaped in 1973.
We went to see a double feature at the I-80 of “Woodstock” and “Performance”. Some girl crashed into our parked car thinking she could park in the exact same space. She was stoned and confused and quicly released her two boyfriends from the trunk. They took over and drove away. Silly, because we already had the plate number. She was arrested on Monday.
Of course we left early and missed “Woodstock”…how does it end?

I used to call this the L-O-V-E Theater because on the back of the screen had the famous LOVE sign. I remember going as late as 1987 though if I recall it was closed for a few years before then. I saw movies there in 1982 (and earlier)but think it may have been closed 1983-1986. Not sure though. Around 1990 or later I drove by and saw them tearing down the screen. That was sad to see. In the 70’s I liked going there because they showed the famous dancing hot dog intermission. When they closed it, that went to the Cicero (which stopped showing it before they closed).