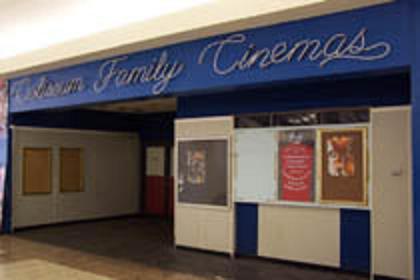 Opened as a 1,300-seat theatre August 18, 1971. This fourplex, located in Oakland’s Eastmont Mall, is probably best-known as a major exhibitor of many “blaxploitation” films during the early-1970’s.

It was subsequently known as Four Star Cinema from December 19, 1980 and later
as Coliseum Family Cinemas.

i see that one person that left a comment said he didn,t come here because there were way to many black kids well i used to go here al the time and i,m mexican and i never had problems here a lot of black and mexican kids would come here to watch movies i have found memories of this theater .

The Eastmont Mall was not as scary as previously reported, in fact that area of East Oakland was, at the time, fairly quiet and residential. The Eastmont 4 was one of the few places in the Bay Area where you could see drivein movies in a hardtop. Not only blaxpolitation but weird, horror, and “hard R” flicks would play here. The theatre was nicely designed and, when AMC ran it, was clean and well-staffed. The auditoriums were small and sound would bleed from one auditorium to another (not unusual for a 4-plex but the bleed was worse than usual). Many good memories there. No one ever bothered me. The only hardtop I know of that ever played KILLER SNAKES uncut. In fact, the Eastmont 4 would show titles that did not play anywhere else in the Bay Area!

When I was a kid I watched a double feature of The Karate Kid and Gremlins at eastmont! Those were the good ol' days I have no memory of it ever being a rough theater at all.

This theater opened originally in April 1970.

From www.reeldistraction.com, this was the programming for that theater on Dec 25, 1974 (they had a copy of the Oakland Tribune theater guide listing):

I remember going here a few times whith my parents when I was really really little. I can vididly remember seeing LIVE AND LET DIE (In which I today think were 2nd run showings, but started my fandom with 007.) and ORCA The Killer Whale.

When my family moved to Oakland in the mid-80’s, as a teen I began patronizing the movies here often with my younger brother, sometimes alone. It was then I noticed the cinema had been relocated to another part of the mall. Saw more 2nd run and B-fare there then I’d care to list.

I think the previous comment made about the Four Star Cinema’s clientele is greatly exaggeraed. True, Eastmont Mall wasn’t located in the ‘burbs, and the audiences could be a little rowdy… (which was part of the charm imo!) but me and mine were nice middle-class kids, and we never had any problems when spending an afternoon there.

Chuck Johnson, had a great tv show on KEMO Channel 20 called Soul Beat. His studio was located in the Eastmont Mall. He took over operation of the theater, changing the name to the “Soul Beat Cinemas”.

This opened on August 18th, 1971. Grand opening ad in the photo section.

This reopened as the Four Star Four on December 19th, 1980. Grand opening ad in the photo section.