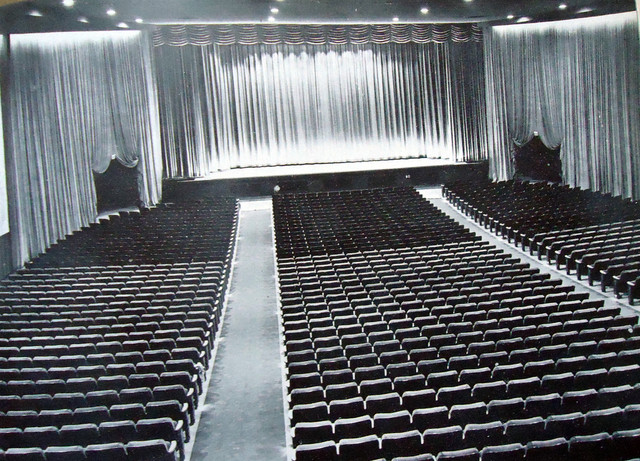 The Lake Theatre started as a single screen neighborhood theatre, opening on September 1, 1949 with 1,600 seats. Large naughtical murals on the side walls of the auditorium were by interior designer Hans R. Teichert.

It was expanded in the 1970’s to the 1990’s to its present 7-screens. The theatre was renamed Lakeshore 7 Cinemas, with the Art Deco style Lake neon tower still lit up brightly over the Euclid sky.

The Lake was built in the late 1940s, and was of similar style and layout (though reversed) as the Mercury Theatre in Middleburg Heights. As with the Mercury, it was built by Modern Theatres as a single-screen movie theatre, no working stage. When they re-opened it in the late 1970s I gave them the original wood and glass horseshoe-shaped candy stand from the Mayland Theatre, which had been taken out of use when GCC renovated that house. It was 1 guy trying to make a go of it and I wanted to help him out. The older Shore Theatre that was next door was built in the 1930s. It sat empty for many years and was in pretty bad shape when it was demolished in the early 1980s.

Some of the information in the original entry for this this theater is not correct; there is no connection between the demolition of the Shore and the expansion of the Lake into what is now the Lakeshore 7. The Lake and the Shore were not next to each other – the Lake address is and was 22624 Lakeshore Boulevard; the Shore was at 22500. A number of storefronts separated the two theaters, most of which remain today. The site of the Shore in now occupied by a bank and
an entrance to the parking that was behind the the theaters.

As dave-bronx points out, the Shore was demolished in the early 1980’s. Both the Lake and the Shore had been closed, but some years after the demolition of the Shore, an entrepreneur with community support, reopened the Lake. Its first expansion was by triplexing -two smaller cinemas were built into the original auditorium. In the early 90’s, four cinemas were added along one side of the theater by capturing an alleyway and perhaps one or two of the stores, but none of the expansion occupies any part of the Shore’s footprint.

The Lakeshore Cinema just under went remodeling. Atlas Cinemas added stadium seating to the viewing rooms. Along with remodeling the owners put in larger screens.

The Lake theater opened in 1949 with the showing of We Were Strangers staring John Garfield and Jenifer Jones. Its next feature was titled Look for the Silver Lining. The Lake was a popular neighborhood house for many years. The Lake was always considered a step above many other neighborhood houses. I was a projectionist there from 1980 yo 2002. I watched the Lake grow from one screen, to three, to seven. The current management is doing a good job. A visit to the lake will take you a step back into the past while visiting the future.

This was originally “the Lake”. It was part of the late 40s/early 50s development of retail along Lake Shore Blvd and probably dates from 1949-1951. It was part of the Associated Theatres chain. They sold it in the early 70s as they switched to multiplexes like the one at Great Lake Mall that they owned. It was always a first run theatre during its Associated ownership and was the nicer of the two theatres in the area. It briefly functioned as a $2 second-run theatre before closing and its later renovation.

The Great Lakes was a built has a single screen by Associate Theaters around 1168/1969. It was operated has a single screen til Associate sold the theater and Midway mall to Blair Mooney (National Theaters. Both of then where then twinned. It was ok at first til Blair remodeled and added 4 more screens. It became one of the best theaters in town

1168? I did not know there were movie theaters in the Middle Ages.

Here is page one of a Boxoffice Magazine article from January 7, 1950, with photos of the Lake Theatre as well as the Mayland Theatre, built the same year and designed by the same architects. Additional photos of the theaters appear on the two subsequent pages. The final page of text can be found at this link.

I remember that my church of the 1960’s, St. Robert’s (on Lakeshore Blvd, about 24000)said their first masses were said at the Lake Theatre while the church was being built. This was before I was born. I always had the impression the Lake was the “expensive” theatre, and the Shore was the cheaper one. It may be that the movies at the Shore were more appropriate for kids however, as I was one and the parents were in charge. I am pretty sure I saw “the fly” and maybe “the blob” at one or another of these two. I grew up in Euclid Ohio.

I lived in the Cleveland area until my Case graduation in'59 and went to the Lake and Shore (I think that area was known as 222) many times, in part, as my old Glenville theaters were in decline. I remember and agree what other folks have said,i.e., the Lake was nicer —that’s where you took dates. In 1954, I took a date to see the now classic Sabrina — where ever my date is now, here’s looking at you kid! The building of suburban theaters like the Lake, Mayland and the Fairmont (U. Heights) spelled the death knell for inner-city Cleveland movie houses. As for the Shore, in ‘58 my girl friend (now my wife) and I saw The Bridge over the River Quay (sp?) and as folks often did in those days, came in half way thru the movie, a practice unheard of today. You older folks will remember that you stayed until they showed the movie again and left when they got to the part you had seen already — this gave rise to the now cliche, this is where we came in! I wonder if younger folks realize that started in the movies? One Shore double feature I took in consisted of The Caine Mutiny and Guys and Dolls —both flicks now shown often on cable etc.