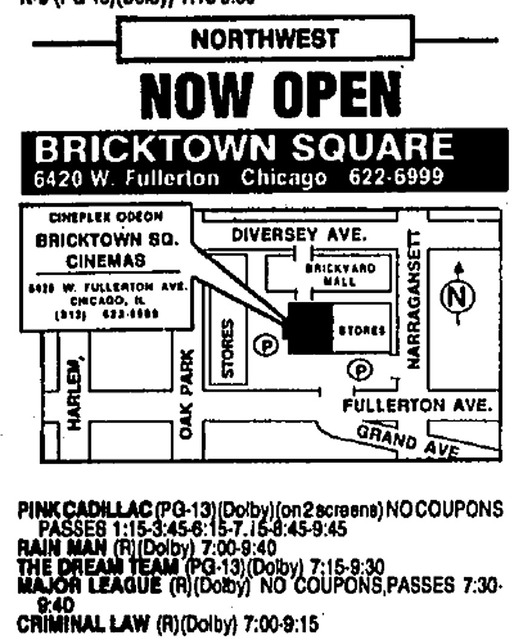 This six-plex was opened May 14, 1989, near the now-demolished Brickyard Shopping Center by the Cineplex-Odeon chain. It was located in the Galewood neighborhood on Fullerton Avenue at Narragansett Avenue across from Riis Park.

This theater was originally equipped to show 70mm films. In the late-1990’s, the Meridian chain took over the Bricktown Square. The theater closed in 2000, and was later gutted with a fitness center taking over the space.

There are pictures of the former theater after it became a Sportmart on its entry page at CinemaTour. The design was used for a number of other theaters around the Midwest especially.

I remember that theater…Is it gone?

I was hoping to find photos of it as a cinema. I don’t think Cinema Tour is correct. A gym went in there, not a Sportmart. Although that arch on the Sportmart makes it look like a 1990s Loews design.

I don’t know, PF; you can move around in the Google street level photo above and move in close into the shopping center and you can see that the building pictured on the Cinema Tour page is still there, now branded Sports Authority. I think the gym may be a new build, at least by its pictures on other websites. I will be up in that area in about a month and I will look around.

They’re right next to each other. I would guess the cinemas were in the gym, looks about right for a six-plex, but they could have extended into the Sport space too.

Also, the address of the Sports Authority is the same as that for the theater – 6420 W. Fullerton.

I grew up in the area and went to this theater many times. The Bricktown Square was solely in the gym space. Sportmart and the theater were built and were opened at the same time. Cinematour is wrong. I would really like to see pictures of the Bricktown before it closed too, but I haven’t been able to find anything online. I remember seeing Back to the Future 3 here opening weekend. It played on 4 of the 6 screens! This was a great theater, but the area surrounding it did it in as well as it being sold to short lived Meridian Theaters. I am still surprised Loews didn’t acquire this theater when they bought out Cineplex Odeon-

I got in a fight with some gang bangers the year it opened in 89. It was already a terrible neighborhood by then, but is much nicer now.

I, too, lived and grew up in the neighborhood, at the corner of Grand and Narragansett. As others have said, that other website is wrong. Sportmart, Babies R Us, and Toys R Us, all opened in 1987. If I remember correctly, the location of the theater in 1987 was an empty lot and was late to build, finally opening in 1989. At the time, The Brickyard was desperate for a theater. The only first run theater near us was Norridge. I saw Back to the Future 2 here, Christmas of 1989, and a bunch of friends and I saw a midnight showing of one of the then new Faces of Death movies here in the 1990s.