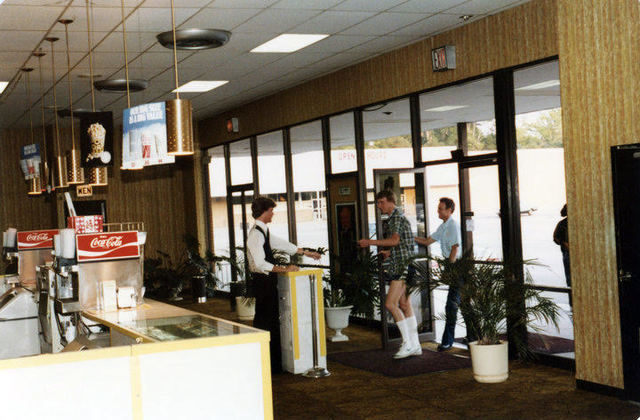 Located in the Northside/Riverview district of Jacksonville, sharing a shopping centre with a K-Mart. The Northside Twin Theatre was opened by ther Eastern Federal Corporation in the early-1970’s. It was a purpose built twin theatre with each identical auditorium having 500 seats. It operated as a first run house until early-1984 when it became a dollar theatre, which was still operating in late-1984.

By 2018 the theatre and the K-Mart have been demolished and a Roses discount store now sits on the site.

The Northside Theatre that was located on Lem Turner Blvd, in the Northside of Jacksonville (Duval County) Florida. This was another one of Charlotte (NC) based, Eastern Federal Corporation’s suburban twin theatres. Unlike the Cedar Hills and Royal Palm and Town & Country that were originally built as single screen theatres, the Northside was built in the late 1960’s, specifically as a twin screen theatre, sharing the K-Mart parking lot. The Northside had two identical 500 seat auditoriums with Dolby Stereo in just one of them. It ran 1st run films for most of it’s life, but did change to the dollar format in the mid 1980’s. These pictures are from my personal archives, of which I was the photographer.

Looks just like the Ben Hill Twin in Atlanta. EFC wasn’t bashful about using the same plans over and over.

Rstewart, you are quite right. The Conway Twin in Orlando and the original Royal Park Twin in Gainesville were almost carbon copies of the Northside, and the Orange Blossom Twin in Orlando was the same with the exception of the glass front of the lobby which matched the strip center that it was part of. The original Royal Palm in Atlantic Beach, was very close in design to the Varsity in Tallahassee and the Cedar Hills in Jacksonville.

I visited the Varsity in around 78, it was nearly identical to the Miracle in Smyrna, GA. EFC had the Miracle, North Springs, Toco Hills and Belvedere that used a variation of that design in Metro Atlanta.