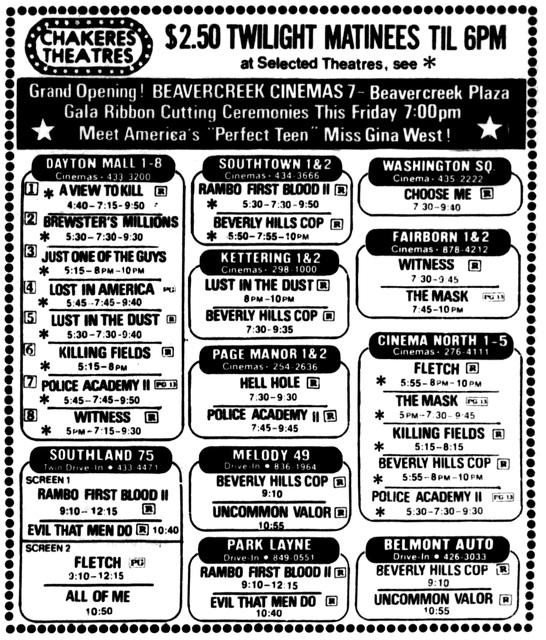 Maxwell A. Milbauer and his wife, Emma, enjoyed entertaining children in the Belmont area by showing 16mm movies on a large sheet that hung in their back yard. On one particular evening Elvin Doll, and his wife Edith, came over to watch a movie. Max and Elvin worked together at the Hyland Machine Company and talked a few times before about beginning a business of their own. They hadn’t really thought of any venture that suited them at the time. Edith remarked that perhaps they should open an outdoor theater where people could watch a movie in the comfort of their car. The two men agreed that this was a good idea and brought in another co-worker, Joe Flory. “When they built the Belmont Auto they got into trouble quickly.” Elvin and Edith Doll’s son, Alan, was general manager of B.A.C. Theatres from 1966 to 1979. “Miller Brothers Excavating was out there building for them and they just practically got into a monsoon. They had a terrible time trying to build that place. They almost went out of business before they even got started because the weather wasn’t on their side.” The weather was really bad and they got stuck in the mud, literally.

At this time they felt they had to bring in another partner, Al Foor. They were trying to make a go of it when they just couldn’t do it and ran out of money. They’ve got Miller out there with that big equipment. The next thing you know they still didn’t have enough funding so they included Kenny Curp and Bill Swaney to their venture. This was the beginning of the Belmont Amusement Company (dba B.A.C. Theatres). “We built the business on a shoestring and did a lot of work ourselves. This included mixing concrete for the bases of the speaker posts, as well as pouring and finishing the floor of the concession stand.” Finally, as the theater neared completion, August 6, 1947, was chosen for the grand opening. “We even sent out invitations,” says Flory. “Unfortunately, up comes a big storm. Dayton Power and Light didn’t have the electricity hooked up yet and we were running that close to getting open. They came out and it was lightning and thundering. They didn’t want to go up the pole and I didn’t blame them so we had to cancel the opening night.”

The Belmont Auto Theater finally opened on August 7, 1947, featuring 1946 musical “Three Little Girls in Blue” with June Haver, George Montgomery and Vivian Blaine. The Belmont could park 400 cars and later it was increased to 700 cars in thirteen rows. On June 16, 1948, the screen tower was destroyed by fire with the loss set at $15,000. The fire also destroyed the office and sound equipment in the base of the tower. The Belmont would become the first drive-in theatre in the area to introduce stereophonic sound, car heaters, 3-D movies and CinemaScope. It was also one of the few one-screen theaters to offer two concession stands. One sat in the middle row and another placed in the back. In 1954 the Belmont added new sections to its original screen to make a CinemaScope screen 96 feet wide and 65 feet high. To celebrate the new wider screen Max and Elvin Doll, who did all the booking for the Belmont, booked on February 28, 1954, a new 3-D Rita Hayworth movie entitled “Miss Sadie Thompson”, “which, to say the least, should bring out all the young lady’s advertised dimensions,” noted Journal Herald’s film critic A. S. Kany. Later on John Parker who operated the North Star Drive-In would handle the bookings and promotions for the Belmont Drive-In and Sunset Cruise-In theatres.

Since the 3-D process needed both projectors to run at the same time, an intermission was usually needed during the film so that the two projectors could be reloaded to show the second part of the movie. According to Alan Doll, Max wanted to be able to screen a 3-D movie without any interruptions. “Max was a fellow who wanted to do everything and do it right. Belmont became the first drive-in to be able to do a 3-D change over without an intermission. They had four projectors rather than just two.” At first Twentieth Century Fox, which controlled the new CinemaScope process, refused to release CinemaScope films to any drive-ins that did not have a stereo sound system. Such a setup was an expensive investment, since it would entail a two box speaker system that allowed a patron to have a speaker for each side of the car. Seeing how well the Cinema-Scope films were being received in downtown theaters, the Belmont purchased stereophonic sound equipment. “In order to have stereo you couldn’t just have two speakers per car.”

Alan recalls. “That really didn’t give you stereo. You had to have special equipment inside the concession stand, there in projection booth. They had all that. It was true stereo. They were the only drive-in I know of east of the Mississippi that had stereo.” The first movie to be shown was CinemaScope’s “Beneath the 12-Mile Reef” on May 23, 1954. Unfortunately, Twentieth Century Fox soon changed its mind and began allowing drive-ins without stereo systems to show CinemaScope movies and Belmont’s monopoly of this type of movie came to an end. The Belmont eventually became a year-round drive-in when it was the first in the area to offer car heaters for use in the winter. “When you entered the Belmont Auto you went to the box office. As you went through, there was a garage to the left where we gave out the heaters.” Alan recalls. “Then as you exited the theater you had an office where you dropped off the heaters. During the day the maintenance man would move them all back to the other building.” In 1957, Max and Elvin Doll bought the Sunset Cruise-In and reopened it on September 6, 1957. The thinking was they might get better deals when booking movies for two theatres. Milbauer died in December of 1960. On September 13, 1962, a big wind storm blew down the wooden screen tower and it was replaced this time with a new all steel screen tower. The airier reopened on September 22, 1962. For the 1963 season, the Belmont reopened with a new concession stand.

On February 22, 1977, the Belmont Auto Theatre brought back stereo sound with the showing of “The Man Who Fell to Earth” starring David Bowie and Sean Connery in “Zardoz”. The stereo system had not been used for a number of years, but after investing $30,000 to rebuild the system it was as good as new. At the time it was reported as being the only known drive-in to still have stereophonic sound. The last few years the stereo speakers were replaced with newer technology. Patrons tuned in their car radios to an AM frequency to listen to the movie. The car heaters were also gone, being too expensive to maintain. On August 2, 1977, Maxwell A. Milbauer was honored with cocktails, hors d’oeuvres and a $100 cake. After that a sculptured memorial with a bust of Max Milbauer was dedicated in one of the concession stands of Milbauer “imbedded in the wall of one of the concession stands.” It read: “A leader in showmanship whose insight made this theatre possible”. In 1983 the Miami Valley Research Park bought the land from BAC Theatres as part of a future plan to build a 1,250 acre research park. The drive-in was operated for them by Chakeres Theaters through the 1997 season and closed for good. The Belmont Auto was demolished in 2002 and now is home to Woolpert, which is a national architecture, engineering and geospatial (AEG) company.

Drive-in motion picture theaters had a reputation for being ‘passion pits’ almost from the very beginning. In 1957 a bill was introduced to the Ohio General Assembly by two Montgomery County delegates to ban unmarried persons under eighteen from attending movie theaters after midnight unless accompanied by parents or guardians. The measure was sponsored by State Representative Jesse Yoder and Charles W. Whalen, Jr. Yoder told the committee he had introduced the bill because “people are disturbed by the goings-on in drive-in theaters after midnight.” Harold B. LeCrone, assistant county prosecutor, told the house judiciary committee that “illegitimate births in the county are stemming primarily from one drive-in.” He did not name the offending theater. “We know it must be happening,” LeCrone continued. “The bars close and the dregs are using the places. They go off in a corner of the drive-in and park. It’s a little cheaper than renting a motel.” Robert Wile, of the Theater Owners of Ohio, testified against the bill. “You can’t blame the illegitimate birthrate on the drive-ins because we are cheaper than motels. You should also keep eighteen year olds out of motels.” He also stated that enforcing the law would be difficult since it would take theater operators “hours to check all the cars after midnight to see if there were any minors in them.” Part of the problem was due to the fact that during the early 1950’s some of the local drive-ins began having all night movie marathons. The last movie of these ‘dusk to dawn shows’ sometimes didn’t end until 4 a.m. or later. Drive-in theater owners as far away as Troy, Miamisburg, Eaton and Springfield met at the Belmont Auto Drive-In to discuss the problem. They agreed to drop the dusk to dawn shows after November 2, 1957. “When we saw they (dusk to dawn shows) were hurting the community, we decided to stop them,” said Edward Parker, owner of the North Star Drive-In. “One of the theater operators had been holding out because he felt he was catering to a number of second shift factory workers, but we changed his mind.” The house judiciary committee shelved the bill after hearing that the number of films being shown would be reduced to three, which meant the box office closed at midnight. Owners also agreed to patrol the theater grounds for “unacceptable” activity, such as lovers and drinkers. – Text from “On This Date in Dayton’s History" by Curt Dalton

Why the name Belmont?