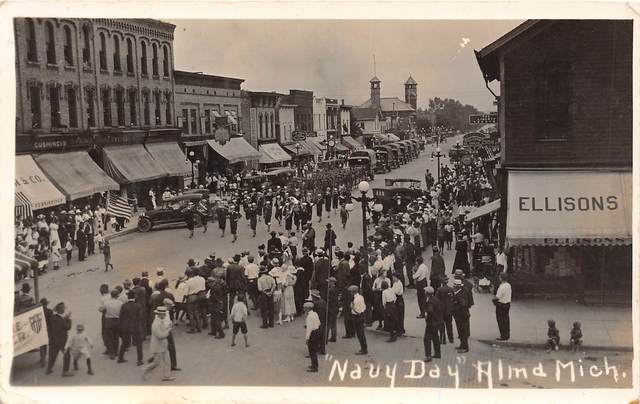 The Fishbeck Theatre was opened in the early-1900’s. By 1914 it was operating as the Alma Vaudette Theatre. It then became the Genesta Theatre and by 1917 had been renamed Liberty Theatre. Per Michigan Film Review publication it was still open in 1922.

The building is still standing in 2018.

This house had some earlier aka’s, according to this paragraph from the NRHP registration form for the Alma Downtown Historic District:

“The Vermeulen Block, sometimes known as the Lee Mercantile Building, was constructed between 1891 and 1893. Henry J. Vermeulen purchased the lot from William Bahlke in 1890. The building originally housed Vermeulen’s General Store. In 1893 Vermeulen mortgaged the building with W. S. Turck and Company in order to build the eastern addition, which soon housed some of Alma’s early theaters. These include the Fishbeck Theatre, the Alma Vaudette, the Genesta Theatre and the Liberty Theatre.”

It also says the Liberty went out of business in the 1920s. The house was listed as the Vaudette in the 1914-1915 American Motion Picture Directory.