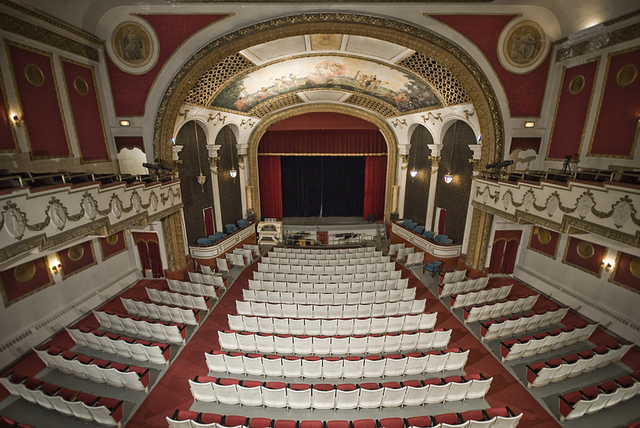 The Columbus Theatre was conceived and built by its first owner, Domenic Annotti. The architect for the theatre was Oresto DiSaia, also known for the now-demolished Metropolitan Theatre and for some work on Veterans Memorial Auditorium. The architectural features of the theatre’s interior include evocative frescoes and murals by artist George di Felice. Among these is “The Music Sensation,” a study of the effects of music upon mankind. The Columbus Theatre and Loew’s State (now Providence Performing Arts Center) remain Rhode Island’s two finest surviving historic movie theatres.

The Columbus Theatre opened on November 1, 1926 with the film “La Boheme” with Lillian Gish and John Gilbert in addition to stage programs. seating was provided for 1,492 in orchestra and mezzanine levels. By the time the 1929 had arrived, the theatre was renamed the Uptown Theatre and continued a long career as primarily a second-run house catering to a large adjacent population in Providence’s Federal Hill neighborhood. The theatre is located on Broadway, about half-way between downtown Providence and Olneyville Square and was within walking distance of large residential areas on all sides.

Because of the nearby ethnic Italian population, for many years the theatre was a focal point for some Italian stage plays, musical events, and Italian movies, although recent Hollywood movies were the mainstay. In 1962, under the new ownership of Jon S. Berberian, the theatre reassumed its original name of Columbus Theatre. Second-run programs continued to be shown until the theatre began an art-house policy that was to expand with the sectioning off of the balcony into a separate “Studio Cinema” in November of 1965. This discreet division resulted in Providence’s first twin cinema.

Art and specialty programs were to play both screens, and the theatre was a rival to the Avon Cinema on Thayer Street for the quality of its programs. Sex-laden films proved to do better business after a while, and within a few years outright pornography became the mainstay on both screens, first 35mm prints, then video projection. This policy, depressing to many film lovers in the community who admired the uniqueness of the theatre, was to continue for three decades until around 2001 when first-run art house programming was re-introduced, then abandoned because of insufficient audiences.

The theatre also became the home of the R.I. International Film Festival. That organization maintains its offices in the theatre building, does an annual August festival, and special programs throughout the year. When the Cable Car Cinema closed in May 2018, they moved their operation into the Columbus Theatre.

Other sporadic stage and screen events continue to make the theatre a valued cultural center for the citizens of Providence and the state of Rhode Island. One hopes it will continue to be so.

Is this still closed?

I was granted permission to photograph the interior of The Columbus Theatre. I also got to meet Mr. Jon Berberian (owner/manager). What a wonderful man. The theatre is incredibly beautiful.

Here is a link to some of the photographs I took. There will be more to come that will be added to the link’s gallery:

SAVE THE DATE: The Providence Preservation Society will announce its final list for the 2011 “Ten Most Endangered Buildings” at press conference at the Columbus Theater, May 5th @ noon.

The Columbus is finally reopening with a concert by the Low Anthem on 11/17/12. http://blogs.providencejournal.com/ri-talks/architecture-here-there/2012/10/column-bway-to-discover-the-columbus-again.html

The Theatre Historical Society archive has the MGM Theatre Report for this theater when it was the Uptown. It’s Card # 552. There is an exterior photo shot in April 1941. The address is 270 Broadway. Condition is Good, and it was showing MGM films. There were 866 seats on the main floor and 486 balcony seats, total: 1,352.

COLUMBUS/UPTOWN THEATRE PHOTO, 1941, IN MGM REPORT Thanks to Theatre Historical Society of America.

With the closure of the Cable Car Cinema & Cafe, it appears they’ve moved their events to the Columbus Theater.