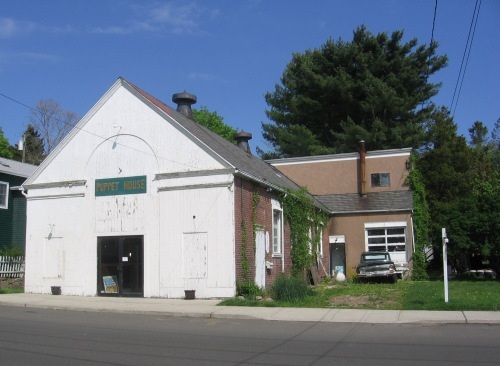 Originally built in 1903 as a silent movie theater called the Lyric Theater. In 1920 the Parish Players, a Stony Creek Community Theater group, purchased the building and opened it as the Stony Creek Theater. At this time the stage area and fly gallery were added on. The Parish Players in collaboration with Lee Shubert went on to produce the world premiere of “Death Takes a Holiday”.

In the 1930’s the theater became a professional summer stock house. Such stars as Orson Welles, Joseph Cotten and many other members of the Mercury Players performed here. They began experimenting with film, which was to include a Stony Creek production of “To Much Johnson”, a farce written by William Gillette. During WW II, the building was transformed into a parachute factory and did it’s part to help in the war effort. After the war the building became a woman’s garment factory. Through this era of its history many locals were employed here. Oil stains can still be seen in the floor from the sewing machines. The factory moved out in 1959 and the theater was about to start a new chapter in its history.

In 1960, Grace Weil, a local puppet collector, decided she needed a place to display her puppets. She purchased the building with the intentions of opening an international puppet museum. Shortly after she acquired the Sicilian puppets that now adorn the walls. Mrs. Weil proceeded to transform the building back into a theater and named it the International Puppet Museum. Unfortunately Grace passed away shortly after the puppets began performing in 1963.

Her son Jim Weil then took over the building and kept it alive with puppet shows and allowing various theater groups, bands and artist to showcase their art here. He always believed that the theater belonged to Stony Creek and the community. With his love for music and the arts, the puppet House soon became a valuable community cultural resource for the shoreline and Connecticut.

In late-2014 it was being transformed into the Legacy Theatre

If you’ve never been here, it’s an amazing time. I was there 3 years ago and again on Saturday night for a concert. Since about 2 years ago, they have been doing live shows 3-4 times a month. They charge about $500 to rent out the space which is pricey, compared to VFW halls for $100 but this space is older and needs the money. The stage is not too wide but pretty deep. It’s hot in there and there are a few overhead fans. The soundbooth in back, upstairs is stocked and the acoustics are very nice.

This was mentioned in the New Haven Advocate’s Annual Manual saying it was “a small, historic hall that, in addition to community theater events, serves as an all-ages music venue for mostly regional acts – folk, punk, blues hardcore, indie rock. Try to verify beforehand who’s playing and when, as the schedule’s been known to change unexpectedly.

Being renovated into Legacy Theatre.