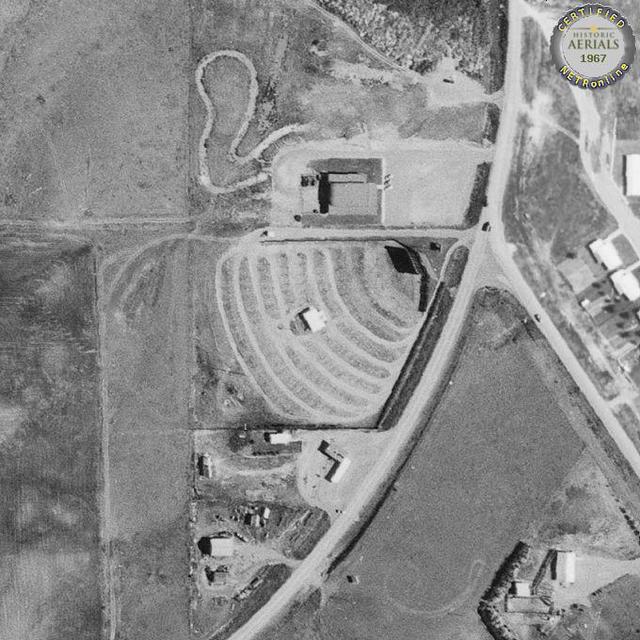 Carl Veseth and his wife launched the Valli Drive-In on June 8, 1957 in Malta. The Veseths also had opened the Villa Theatre in town on June 30, 1955. The new drive-in was managed by their son, Bill. The name of the theatre was selected by a contest entry by Hurley Williams, Jr. of Malta.

The 280-space Valli Drive-In cost a total of $40,000 to build and was constructed by the Ballantyne Company and screen tower by William Veseth. It was still operating into the 1970’s.

Very little of the drive-in remains. Just some hints at the outline and ramps along with the foundation for the projection booth/concession stand.

Boxoffice, Jun 13, 1977: “Mrs. Irene Veseth, Malta, Mont., has announced the sale of the Villa Theatre and Villa Drive-In of Malta to her brother R. C. Pancake. Mrs. Veseth has been associated in the operation of the Malta theaters for 49 years. Veseth Theatres was originated in 1922 by Mrs. Veseth’s husband Carl, who died in 1975.”

The Dec. 7, 1957 issue of Boxoffice ran a full-page spread, with photos, on the new Valli and the Veseth family that built it. “According to Carl Veseth, the drive-in has proven a very good venture, drawing people they have never seen in (their local) indoor house.”