Towne West Square Mall launched in west Wichita in 1980. General Cinemas was in Towne West opening its five-screen interior theatre on October 2, 1980. GCC had also operated two theatres - an interior twin and an exterior quad - at Towne East Mall. By January of 1994, General Cinema left the Wichita malls and it was taken over by Crown Cinema Corporation.

In 2019, the Mall’s valuation dropped by 80% as it reached grey field status - a term sometimes used synonymously with “dead mall” and was foreclosed upon. But the five-screen theatre soldiered on despite the economic downturn. It was closed by Regal on March 16, 2020 due to the Covid-19 pandemic. In November 2020 the owners of the mall requested back rent for the closed months, with Regal declining to pay.

It was taken over by independent operators and reopened as the Boulevard Theatres on May 6, 2022.

Taken over by Crown theatres in early 1994.

The Movie Machine was turned on December 18th, 2002 by Warren theatres. 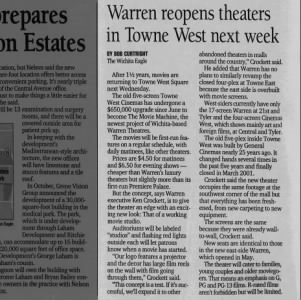