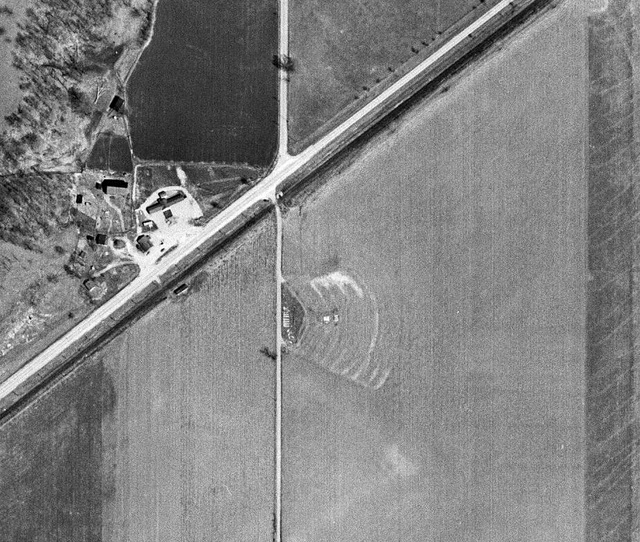 In a June 24, 1950 article that also mentioned the other three drive-ins that opened that year near Martinsville, BoxOffice wrote, “The original drive-in was opened in 1947 when Fred Myers bought a six-acre tract two miles west of town, stuck a screen between two large poles, bought a projector, a blast type amplifying system, a popcorn machine, and was in business, with his Airport Outdoor Theatre. Since then, the spot has been made completely modern and now boasts speakers for 280 autos and a playground for the children”.

The Airport Drive-In debuted on the Film Daily Year Book list in 1949 and was there through at least 1951.

In its first drive-in list, the 1948-49 Theatre Catalog listed the Airport Drive-In, capacity 150, owner Fred C. Meyers, Airport Drive-In Theatre Co. By the 1952, the capacity changed to 280, owner to Fred C. Myers and Edward Campbell Ct. The Airport was not included in the 1955-56 Catalog.

Although its name and hinted location suggests it was near Mc Daniel’s Field, it was not.

Looks like the drive-in was already demolished by 1954. An aerial photo shows the screen and projector booth/concession stand gone. Today, there is no evidence of the drive-in remaining.

Great catch, Drive-In 54! So you can scratch my speculation that it was near the airport. It shows I should apply my rule of shopping: If you can’t find what you want where you’re looking, go look somewhere else!