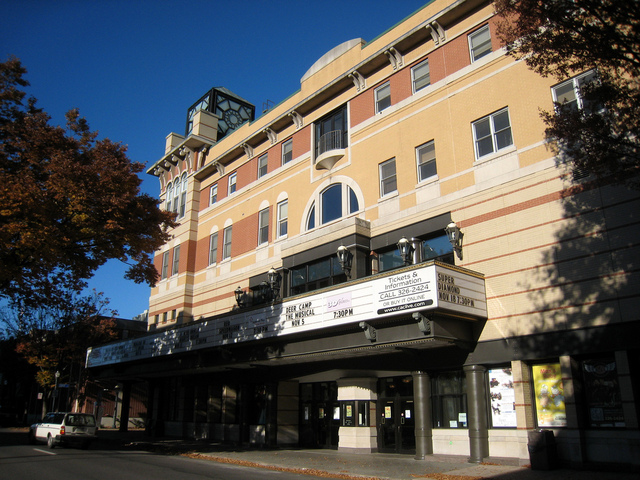 A beautiful, fully restored movie palace combining a blend of architectual flavors including Spanish, English, and Oriental. After its 11 million dollar restoration to the plans of architectural firm Hayes Large Architects, it has become the showplace of Williamsport.

The interior is certainly one of the most beautiful I’ve seen. It’s generally used for a wide mix of live performances and some movies. The movies shown are generally the better Hollywood releases and the more popular independent films. It’s just a wonderful theatre in which to see a movie. The only thing lacking is popcorn.

The theatre, originally called the Capitol Theatre with 2,421 seats, was originally part of the Comerford Theaters Inc. chain. In the 1940’s it was part of the Paramount Pictures Inc, operated through their subsidiary Frank Walker. Its last shown movie before closing for renovations was “Driving Miss Daisy”. Admission had been reduced to a buck but it still couldn’t survive.

The Community Arts Center sells a booklet for a modest price which contains countless interior photos during and after the restoration. It’s a must for all theatre enthusiasts. Next to the theatre is a great older hotel called the Genetti. There’s also an excellent brew pub across from the theatre.

Williamsport, “Home of The Little League”, is one of my favorite cities. Check out the Community Arts Center’s web site and take in a concert, show or movie in Williamsport. You’ll have a great time.

Their web page has moved to http://www.pct.edu/commarts/

Their history page has a lot of info:

The theatre was built as the Capitol in 1928, and reopened after restoration in 1993 as the Community Arts Center. It was the largest theater in the area and the first to be equipped for sound movies. It was considered the most beautiful theater in the Comerford, amnd featured cast bronze chandeliers, and a proscenium with trompe l'oeil details. It originally featured stage shows with movies. In 1936 the main level and stage area were flooded, wrecking the organ.

Unfortunately their web page does not show any pictures except a night view of the front facade. The seating plan shows orchestra, loge and balcony but it is hard to tell if the “loge” is a separate level from the “balcony”

I’m a volunteer with this theater. They do have popcorn, soda and candy for sale with movies now.

I will guarantee you that the architect of this theater was Leon Lempert, Jr. The auditorium is almost an exact clone to the Capitol in Rome, NY, also a Commerford Theater.

The conversion of the Capitol Theatre into the Community Arts Center was designed by the Altoona architectural firm Hayes Large Architects. There are five photos of the house on this page of the firm’s web site. The 28,000 square foot expansion is almost as large as the 32,000 square feet of existing building that was restored.