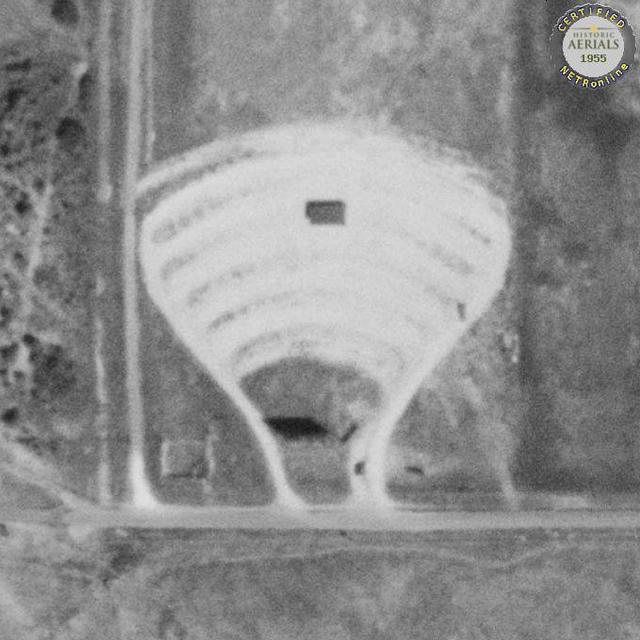 The tiny Nu Vu Drive-In was just west of Monticello High School. It was opened on May 28, 1954 with Alan Ladd in “Branded”. It remained intact through at least 1980. The site is a vacant lot today.

“No Vu” That’s what happens when an SUV with a hatch parks in front of your car.

The snack-bar actually sat there until mid 2005.

The San Juan Record (Monticello), Aug. 7, 1980: A local landmark, the screen to Monticello’s one and only drive-in theater, was razed Monday, August 4, by Leonard Howe, his son Riley, Hardy Redd, and with Julius Harvey as “supervisor.” This ended the hopes of any resurrection of the old “Nu Vu” theater which opened back in the early ‘50s. …

The construction of the “Nu Vu” was started in 1953 with Max Dalton furnishing the land and E.P. (Bud) Corbin doing the construction. It opened in 1954 and was operated by Bud and Arah Corbin. Arah ran the ‘snack bar’ which was constructed at the same time. In 1956 Max Dalton sold his interest in the theater to the Corbins.

Harry Randall purchased the “Nu Vu” from the Corbin family in 1957. At that time, Harry was also owner and operator of the “Little Theatre” in Monticello. Harry and his wife, Jerry, and family successfully ran the theater for 16 years selling to Leonard Howe in 1973. The Howe family ran the theater for four years and then sold it to Grayson Redd.