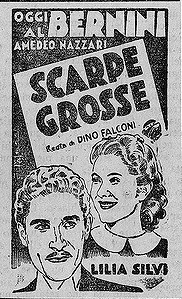 This cinema existed in Rome in at least the 1930’s 1940’s and seems to have been a prestigious first-run house.

On May 18, 1940 the Bernini was showing the 1937 British film “Girl in the Street” (“London Melody') under the title "Sposo il mio amore.” It starred Anna Neagle and Tullio Carminati. Also on the program, according to a listing in Il Messaggero, was live entertainment featuring the company of De Filippo and Taranto. Films and variety stage shows were commonly combined here and at other cinemas at that time.