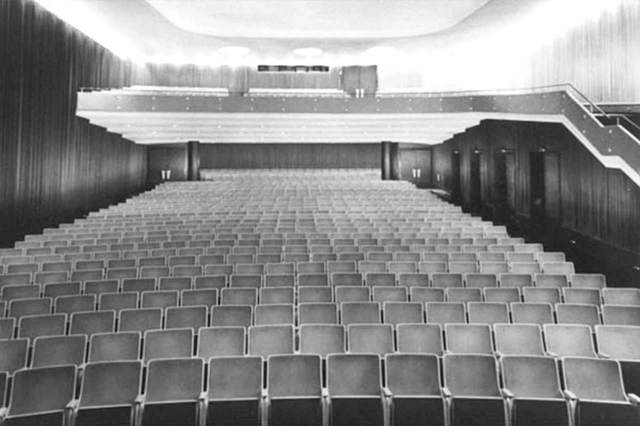 Located in the city centre and built on the site of the Lorenzer Lichtspiele which was destroyed by Allied bombs in 1945 (it has its own page on Cinema Treasures). The Admirals Palast was opened in 1957 and was operated by E. Waegner. The architect was Paul Bode who was based in Kassel. It had 1,200-seats in orchestra and balcony levels. The seats were by Schroeder & Henzelmann. The walls were yellow and the curtain, ceiling & seats were blue. In 1958 the E X projectors by Ernemann were replaced by DP 70 projectors by Phillips for 35mm & 70mm film and a 6-channel stereophonic sound system was added. In 1960 a 3-strip Cinerama installation was added. A new screen with a Cinerama curve was installed (146 degree arc). The stereophonic sound system was enlarged up to 7-channels In 1967 the cinema was operated by Admirals Palast Filmtheaterbetriebe GmbH & Co KG. In 1975 the auditorium was split into two screen with seating for 500 & 200.

Around 1980 three more screens were added and it was re-named Admirals Kino Centre. It was closed and demolished in 2000 for a new cinema named Cineplex Admirals Palast to be built and opened on the site. (It has its own page on Cinema Treasures)