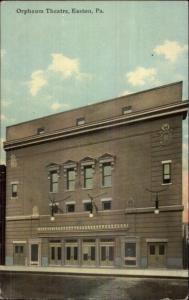 Located on Front Street (later renamed First Street and today Larry Holmes Drive) the Orpheum Theatre was opened as a vaudeville theatre in December 1907. It was listed in the 1914-1915 edition of American Motion Picture Directory. By 1926 it was operated by Wilmer & Vincent Corp. It was still open in 1928, but had closed by 1929. It was demolished in the early-1940’s and the site became a parking lot.