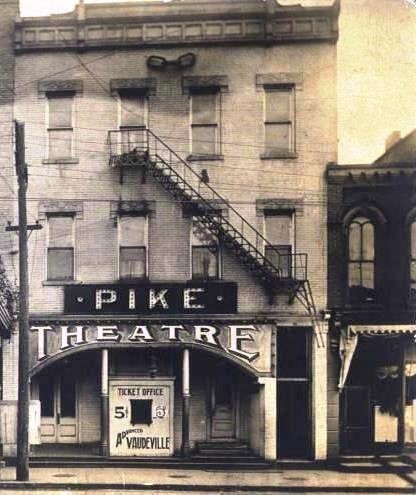 “The Pike Theatre, located in Tuscarawas County, was one of the early movie houses in Dover, Ohio, operated for many years on Tuscarawas Avenue adjoining the Central Hotel. The grand opening for the vaudeville and motion picture theater occurred on July 1, 1907 through the partnership of Edward J. Horn, along with brothers, Jesse and Edwin Allman. The theatre held a contest to select a name; Mrs. Oliver Toomey won by submitting "Pike,” named after the midway of the St. Louis World’s Fair of 1904. Early movies at the Pike Theatre required the projectionist to turn a hand crank on a single machine with one reel that would only last eight minutes. By 1911, the Allman brothers purchased Horn’s half interest and continued operations with Jesse serving as the manager".