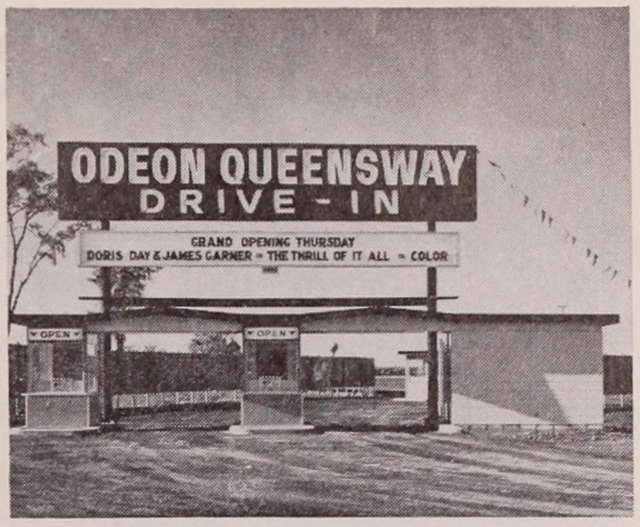 The Queensway Drive-In, “Ottawa’s first new drive-in theatre to be built in 11 years,” opened August 29, 1963 according to an advertisement in the Ottawa Citizen the next day. Its first feature was Doris Day in “The Thrill of It All.” The drive-in was located east of town just north of Montreal Road “where it meets the Queensway”.

The October 21, 1963 issue of Boxoffice concurred on most of those details, noting that the Queensway Drive-In was “three miles out of Ottawa”, but putting the opening date at August 28, 1963. That article said it was Odeon Theatres' second all-electric drive-in. It held 800 cars on its 19 acres, and was built at a cost of $425,000. Its concession/projection building was 104x64 feet, made of concrete blocks, and the screen was 105x45 feet.

Along the way, the Queensway Drive-In added a second screen and radio sound. In May 1985, a projectionist there was stabbed to death after telling some patrons to turn down their music during the showing of “Rambo”.

The Queensway Drive-In closed after the 1986 season, briefly converted to a flea market.

That photo, which shows “Grand Opening Thursday” on the marquee, suggests that the opening night really was Thursday, Aug. 29, 1963. Drive-ins often hold invite-only soft openings the night before, so maybe that happened here and misled the Boxoffice correspondent.