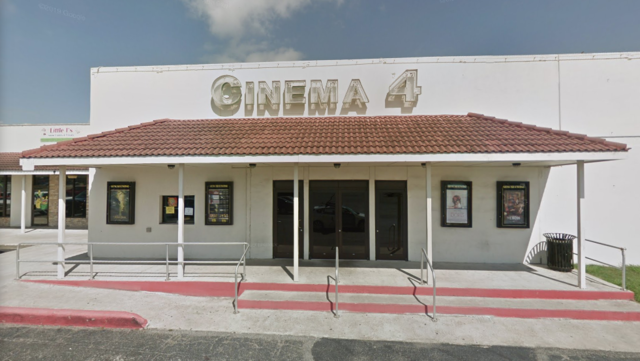 Opened as Cinema 35 in 1977. It was later renamed Rockport Cinema 4. It was closed on August 17, 2017 following damage caused by Hurricane Harvey.

Rockport’s movie theater, Cinema 4, will not reopen. Jeff Dinger, who owns the theater, said on Monday he had no plans to rebuild Cinema 4 after it sustained heavy damage during Hurricane Harvey. Dinger said aside from the physical damage caused by Harvey’s more than 130 mph winds and heavy rains, he was also concerned about the “economic damage” done to Aransas County’s population. Families have been displaced and a large number of Aransas County’s businesses remain closed six months after Harvey. “The market has sustained such damage as to make a motion picture theater impractical,” he said.  Dinger has been showing movies in Rockport since 1977, and said the decision to not reopen the theater was a tough one to make. But the uncertainty facing Rockport and nearby Fulton as the towns recover from the damage wrought by the hurricane makes having a luxury like a movie theater hard to rebuild, especially since “the market damage is hard to comprehend,” he said. As of Tuesday, the Cinema 4 website and Facebook pages still had messages displayed that state, “We are currently closed. Please stick with us as we recover from Harvey. Sincerely, Cinema 4.” Dinger also owns the Northshore 8 theater in Portland, and is a partner with the Alamo Drafthouse in Corpus Christi. The Portland theater is now the closest one for Aransas County residents, now that Cinema 4 will remain shut.