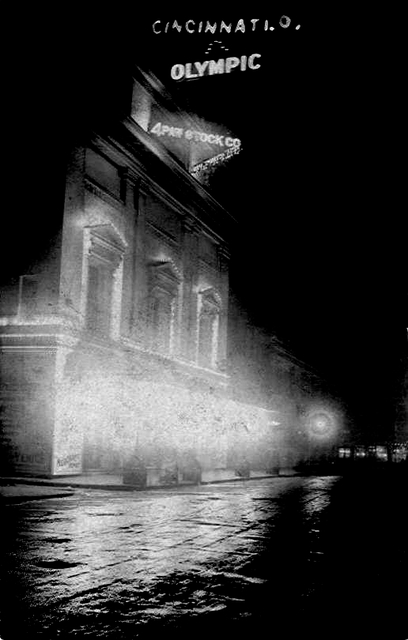 The Olympic Theater was a new-build, live venue built by John J. Ryan on the property once housing the Buckeye Livery and Stables. Architects Bell & Hall designed a marble foyer trying to place patrons within a fairyland storybook upon entry. It launched September 2, 1906 with vaudeville and an animated lantern slide short from Twentieth Century Optiscope Co.

Motion pictures were programmed in the summer hiatus period for the theater beginning on May 1, 1911 first by Samuel Lionel Rothafel. His first booking was “A Tale of Two Cities” starring Maurice Costello and Florence Turner with a full, live orchestra and prices as much as four times high than the competition’s. Rothafel would take this “European style” of film presentation to New York and become a show business icon nicknamed “Roxy” after one of his most famous theaters.

After Roxy’s departure, the Olympic Theater’s next movies were offered by by MacMahon and Johnson Co. Circuit who had incorporated in 1909 to present films elsewhere in the city. As other, more modern vaudeville and movie houses opened, the Olympic Theater transitioned to its best known format - that of burlesque. It became known as “the Big O” home acts including George Burns and Billy Watson.

The two burley houses, the Empress Theater on 9th Street which had launched December 27, 1909 and the Olympic Theater merged to match the merger between the two largest burlesque circuits on January 16, 1928 ending the Olympic Theatre’s run.

The Olympic Theater sat vacant for two years and was purchased along with the neighboring Murdock Building. The theater had the distinction of being one of the first of many theatres in downtown Cincy razed for a parking structure. The Cleveland Wrecking Company demolished the building but not before offering everything for sale from the Olympic Theater ranging from the foyer’s marble to the theatre seats to its trusses.

The theatre was so well remembered that the parking structure built on its site was named the Olympic Garage. Designed by Oscar Schwartz and built by Parkway Construction, the 1930 parking facility was still in use more than 90 years later in Downtown Cincinnati.