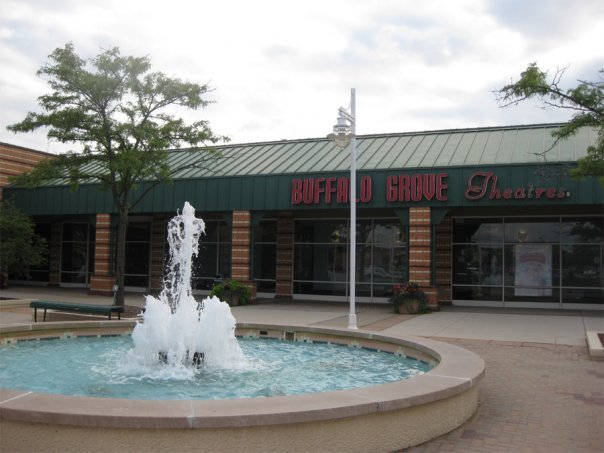 Located at the Town Center shopping center in Buffalo Grove, on McHenry Road, the Buffalo Grove Cinemas opened on November 24, 1995. It was operated by Chicago Area Theatres who at that time also operated the the Wilmette Theatre in Wilmette, and screened family-friendly second-run fare. From the late-1990’s until the mid-2000’s, it was part of the Value Theatres chain, still screening second-run but ocassionally first-run and independent films too.

From 2009, it has been under new independent ownership, for the first time as a first-run theatre.

Disrespectful Management and Dirty Theatre!
Saturday night my husband and I enjoyed a quiet dinner without our 3 children and planned on taking in an inexpensive movie at the Buffalo Grove Theatres. Their seats are always $2 a ticket and we decided that given our current financial constraints as a result of moving and having not sold our other home we could barely afford a night out. After standing in a swiftly moving line, we handed the cashier the last $10.00 in my husband’s wallet and received $1.00 in change. Before stepping away, he turned to the cashier to tell her that he had given her a $10 bill and she replied, “yes, and I gave you the correct change.” We stepped away because we were holding the line up but as we did, I read the sign and thought….maybe the seats were $4 tonight and I wasn’t going to make a stink over $1. We went inside where there were theatre goers jockeying for seats in a filthy sticky floored theatre, and insulting a handicapped woman on a scooter because she was blocking their way. The entire experience was an assault to our senses. In an attempt to try to enjoy our evening out, we sat down and listened as the couple behind us discussed how this whole environment was only acceptable because of the $2 ticket price – at which point my husband and I became enraged. We stepped outside and asked for the manager. The manager was insubordinate to me personally and professionally committed the greatest sin. She lied and said she had been standing there when our change had been made. She defended her cashier by saying that she had been there 8 years and knows the ticket price and that we were the ones mistaken and not her or the theatre. If I wanted to further contest the situation I would have to wait til the end ofthe night when they counted the drawer. I have never been so insulted or humiliated. Having exactly $1.00 left in our wallet that night, after buying 2 tickets to a $2 film with the last $10 bill either of us had, both my husband who is a practicing attorney and I who am a full time marketing consultant and writer knew the truth. As I left muttering that I was a writer and that her unacceptable behavior towards us would not go unheard, she yelled, “ Yah, you do that Maaaaaam, Write me up Maaaaam, Write me up”. Job done and satisfaction ensues even though I have spent another $10.00 in what I would have been paid for my word count in this letter! No Irony is lost on me or my husband that the movie was entitled “Friends with Money” as we left the theatre having not seen the movie and broke!

Don’t worry LongGrovemom, if I ever take over this place, I’ll fire those people. People like them are the reason why people nationwide are staying away from theaters.

Here are photos of this theater.

LongGrovemom, I’ve been going to the BGTheatre for over 15 years. While I agree the place could use a lot of cleaning up, I have never been cheated or treated disrespectfully by staff. A savvy “practicing attorney and …full time marketing consultant and writer” should certainly be intelligent enough to check their change before leaving the window. Especially if it’s their last $10. Sorry you had a bad day and needed to kick the dog. I hope you’re feeling better now.

This is a great second-run theater. They are not too many in the Chicago area now. Saw “Miss Potter” in theater #3, after a few of the theaters had played it and a couple of sneak preview showings in regular theaters and no wide release. On Tuesdays admission, is $1.00 all times and $2.00 all times for the rest of the days.

Photos of this theater are HERE

Did the theatre ever show “Goodfellas”, “Total Recall”, “Casino” or “Boogie Nights”?

It opened November 24 1995, so Goodfellas and Total Recall are out. It might’ve played the others but it was family-focused second run, so I would think it unlikely. It was at first planned as a 4-screen discount second run operated by the Pickwick management. This was supposed to be at the north end of the mall, in a free standing building. The Town Center was envisioned as a sort of downtown for the community when first built in the late 80s, but as it failed to take off, redevelopment was necessary. With the town stepping in, they forced the addition of the theater to raise bonds. The project then passed to Mark Stern of Chicago Area Theaters, the same Stern family with a long history of theaters in Chicago, most notably the Wilmette, Cinema, Devon, and Three Penny. Architect was Barry Weinstein. It shared some interior accents with Marche restaurant in chicago, such as “free-form metal accents in several places. Among the most obvious are the numbers that identify each of the five theaters inside the multi-screen complex.” created by Jerry Kleiner. It also featured handpainted walls and designated rows for birthday parties.

Who owns this theatre these days? Is it independent? Value Theatres certainly didn’t last long.

The theater’s owner has launched a fundraising drive to raise the funds to convert to digital projection; if it fails, the theater may close. View article