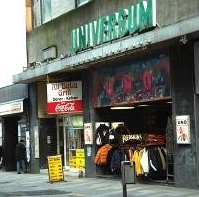 The Union Theater was opened in 1912 and was operated by Karl Beckers. It had 250-seats. In 1921 it was closed and enlarged to 1,200-seats and re-named Ufa Palast which opened on 11th May 1922 with “The Wife of the Pharao” directed by Ernst Lubitsch and starring Emil Jannings & Dagny Servaes. It was operated by Universum Film AG and Konzertsall & Theaterbetribe Gesellschaft. The theatre contained a stage for live performances. After 1941 the building was badly damaged by Allied bombs during World War II.

In 1951 the cinema was repaired, re-opened and re-named Universum Filmtheater. It was designed by architect Heinz Dahlbudding and had 1,380-seats. The walls of the auditorium and the seats were covered with green velvet. The size of the live performance stage was 10x10 meters. The FH 66 projectors were by Frieske & Hoepfner with optical sound readers by Celevox. The sound system was by Lorenz. In 1978 the cinema was triplexed and was operated by Ufa Theater Heinz Riech.

Around 1997 the cinema was closed and it became a retail store. In 1999 the building was demolished and the Courthouse Dortmund was built on the site and opened in 2002.