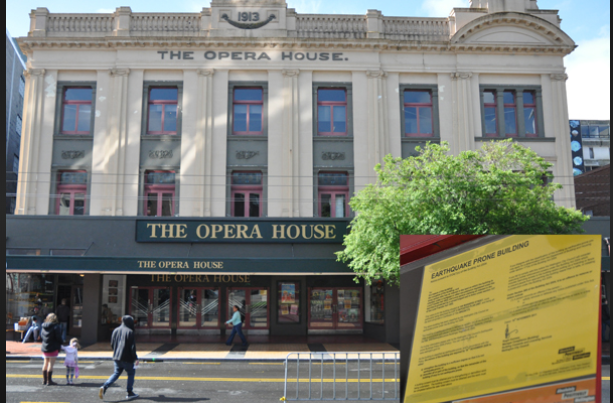 The Imperial Opera House was opened in 1878, but was destroyed by fire on 15th June 1879 which took out an entire city block. In 1911 construction began on the Grand Opera House, designed to the plans of architect William Pitt of Melbourne, Victoria, Australia and overseen by Wellington based architect Albert Liddy. The Grand Opera House was opened on 12th April 1914. It had 2,141-seats in stalls, dress circle and gallery levels with 50 seats in boxes. The opening presentation was by the American Burlesque Company. Extensive alterations were carried out, including a new façade, readjustment to the seating areas and it was converted into a cinema, named Everybody’s Pictures from May 14, 1914. This was a popular enterprise, but the theatre later reverted back to live productions.

By January 1974 it was operated as a live theatre by the J.C. Williamson chain. In 1977 it was restored and was renamed State Opera House. On June 27, 1985 it was designated a Category I Listed building by Heritage New Zealand. In 2005 the Opera House was used as a location for the theatre scenes in the Peter Jackson directed movie “King Kong” starring Naomi Watts & Jack Black.

In July 2011 it was renamed The Opera House. In October 2012 it was deemed to be an earthquake risk and funding was provided by Wellington City Council and the Performing Arts Foundation of Wellington to have the building strengthened and restored to code.