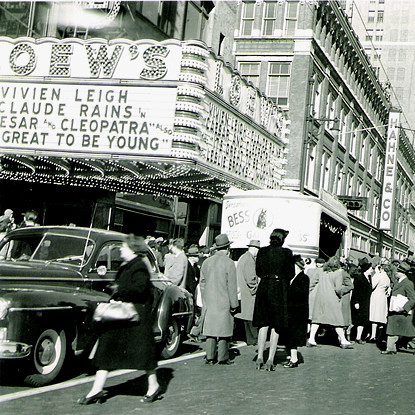 The Loew’s State Theatre was part of a 1921 Loew’s building boom that included four theatres by architect Thomas W. Lamb, this one plus the flagship State Theatre in Times Square, NYC; the 83rd Street Theatre also in Manhattan on Upper Broadway; and the Gates Theatre, in the Bushwick section of Brooklyn.

The Newark Loew’s State Theatre first opened on December 12, 1921, presenting vaudeville and a first-run feature movie. Due to its Loew’s affiliation, it was always considered one of the top theatres in downtown Newark. I saw my very first movie there, “The Wizard of Oz”, in its original 1939 release. I lost track of the theatre when my family moved to NYC, but I think that it remained a Loew’s for its entire lifetime. It was closed in 1977, and was demolshed in 1978.

Warren, people then dressed up when they went to the movies, in cities, too, right? Philadelphia’s Boyd Theatre didn’t have stage shows, and the photos we have from then of people waiting in line or arriving also show people were dressed up.

Not so relevant for this website, but Bambergers set up in the 1960s or 1970s in suburban Philadelphia malls. Not Macy’s, as apparently parent company Federated thought the local New Jersey store would attract more customers than a NYC store.

Oh, and I’ve walked around in downtown Newark. Let’s hope it revives and the closed historic theaters that were not demolished have a chance to reopen.

Back in the mid 80s my job required a trip from LA to NJ.
Imagine my shock to find a parking lot at the corner of Broad and
New streets. I was asst mgr at Loews Newark 1950-51. Murray Sharf
was mgr. Loews was one of four first run houses in downtown Newark.
The other three were the Paramount, Branford, and RKO Proctors. The Adams
had become a burlesque house, I think. There was another on Washington
called the Empire. Or am I confusing these two? Loews State Newark was
certainly a movie “palace”, but not nearly so grand as Loews Jersey in Jersey
City, where I worked later on as asst mgr. The Jersey is truly deserving of
words like “magnificent” and thankfully has been preserved and renovated.
Is there anyone out there with memories of this era?
by gallion 6-13-10

Thanks for your memories gallion, I worked for Loews in Nashville,Tenneessee from 73 thru 81,good to hear from another Loews Guy.

Back in the mid-1960s, before the emergence of malls, my mother and I would do any major shopping in Newark. At the conclusion of one such expedition, she treated me to a â€œMan from U.N.C.L.E.â€ movie at the Loweâ€™s. I wish Iâ€™d been old enough then to appreciate what a beautiful theatre I was in. My mother frequently told me what a fabulous city Newark used to be. Based on the pictures posted on this site, and the entry for the Newark Paramount, I can see what she meant.

Can someone suggest a way to find out what was playing at the Loew’s in Newark on the day the Blizzard of 1947 began? The date was December 27, 1947. Thanks. Carole

Carole. The feature was “Good News”.
I was one of the ushers on the late shift. The last show started
at about 10:30pm. It had been snowing heavily for several hours.
I counted the house about 1130 and 25 patrons were still in the house.
By then most buses had stopped running. This forced a number of us,
employees and patrons, to spend the night in the mezzanine lobby.
This was a storm, and a night, to remember.
posted by gallion 1/7/11

December 21, 2012 Washington Post article about the closure of Takoma Park video store owned by Annie and Barry Solan states the two met in 1975 at the State which Barry described as a “raggedy old vaudeville theater.” The article states that in 1979, Barry became a co-owner of the State where he screened films such as “The Rocky Horror Picture Show” and “Our Hitler” an 8 hour movie. After they married in 1981, he bought other theaters including Philadelphia’s Roxy before entering the video business.