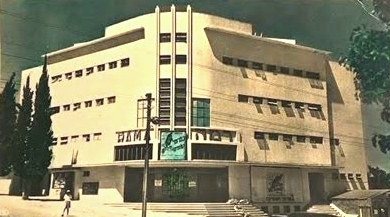 Rama Cinema, which was the second cinema in Ramat Gan, was inaugurated on 28th May 1938, at the corner of Bialik Street and Jabotinsky Street in Ramat Gan.

The establishment of the cinema was considered one of the most important projects at the time, the opening event was held in the presence of the Governor of the British District, Mr. Crosby, and was attended by the Eretz Israel Symphony Orchestra which later became the Israel Philharmonic Orchestra.

The design of the building was initially entrusted to a German architect, but after it left the country, the design was entrusted to engineer Israel Michaeli.

In the years 1947-1945, the cinema used to screen Arab films, especially Egyptian films, every Thursday, which attracted hundreds of residents of the surrounding Arab villages.

Adjacent to the cinema, “Cafe Rama” was very successful and was very well known at the time and served as a central meeting place that many used to visit.

In the 1970’s and 1980’s, a Reform religious community called “Truth and Humility” also operated in the building on the first floor.

In 1981, Avraham Deshe Pashanel transferred the activities of the “People’s Theater” (“Teatron Amami”) under his management to the Rama Cinema.

The cinema ceased operations in 1982 due to managerial and financial problems.

In 2010, a tower construction company purchased the building and has built a 23-story tower while preserving the entire two fronts of the original building.