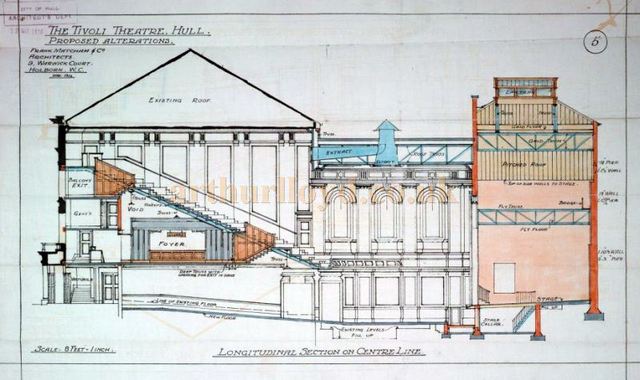 The Theatre Royal was located in Kingston-Upon-Hull city centre at the corner of Paragon Street and South Street. It was built on the site of the Queen’s Theatre and opened on 27th November 1871. The architect was G.A. Middlemiss of Sunderland. The opening night productions were “Post Boy” & “The Ticket of Leave Man” starring Sefton Perry, the owner of the theatre. Seating was provided for 1,200. The proscenium was 26ft wide, the stage was 40ft deep and 60ft wide and there were eight dressing rooms. Interior decorations were by Messrs White & Co. of London. Alterations to the theatre were made in 1888 by an architect named Smith, and it was closed in 1902 due to the opening of the Alexandra Theatre which was also owned by the owners of the Theatre Royal.

It was re-opened by the same owners in 1912 as the Tivoli Theatre, operating as a variety theatre/music hall. In 1926 there were plans made by the architectural firm Frank Matcham & Co. for alterations to the Tivoli Theatre, but these were never implemented. In 1941 a ‘Mighty’ Lafleur Organ was installed to accompany the orchestra of 40 musicians. Newsreels and short subjects were part of the variety programme on the screen at the Tivoli Theatre in the late- 1940’s. Music hall/variety star and film star Arthur Lucan was appearing at the Tivoli Theatre in his stage persona ‘Old Mother Riley’ on 17th May 1954 when he collapsed and died on stage due to a heart attack. He was 68 years old. Could this have been an omen, as the Tivoli Theatre was closed as a variety theatre soon after? It was equipped with a RCA sound system and reopened as a 875-seat full-time cinema, renamed Tivoli Continental Cinema screening foreign films, but that venture failed and it closed for good in late-September 1954.

It was demolished and a building named Tivoli House was built on the site, housing Cooplands Orchard Café with offices above. The café has on display a Bronze memorial bust of Arthur Lucan which was unveiled by Danny La Rue on 8th August 1986 and there is a display of posters and photographs of the Tivoli Theatre.