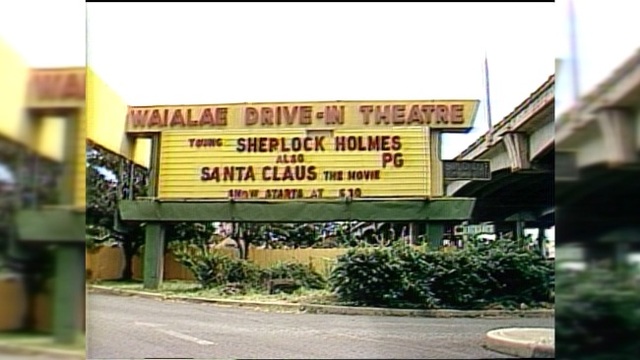 Located at Waialae Avenue and 21st Avenue. The Waialae Drive-In opened May 24, 1956, with Elizabeth Taylor in “Elephant Walk” and James Stewart in “The Naked Spur”. Operated by Royal Theatres, it had a capacity for 790 cars.

The Waialae Drive-In closed in January 1986 with the movie “Young Sherlock Holmes”. It has since been replaced by an upscale subdivision. It sat across from the Kahala Mall.

Local legend has it that the ghost of a faceless woman with long hair haunted the ladies' room of the drive-in. The Wai'alae was located close to an old cemetary.

The Wai'alae Drive-In, was a popular spot on Oahu. The drive-in was owned by The Royal Chain that also had another Drive-In on the island The Royal Sunset of in Waipahu and a few other theaters like the Marina, Royal, King & Queen. By the mid 80’s The Royal Chain bowed out. The Marina was taken over by Consolidated and went on for a few more years before closing.

I uploaded the 1968 aerial photo of the drive-in and the mall.

Approx. address for this drive-in was 4348 Waialae Avenue.

Kiionioni Place and Loop are named after the Hawaiian phrase for “moving picture”, in honor of the Wai'alae Drive-In that was there.

This opened on May 24th, 1956. Grand opening ad in the photo section and below.