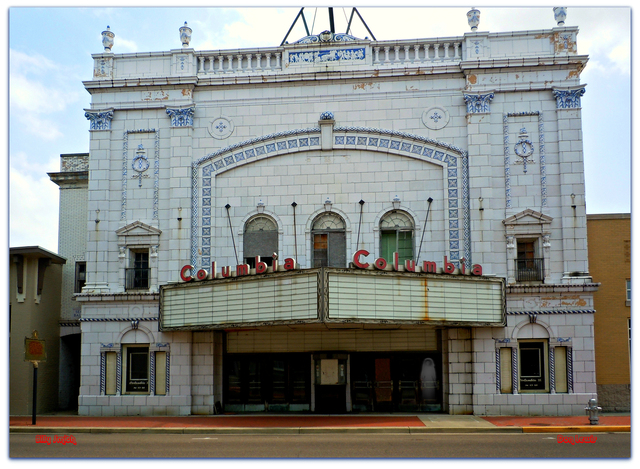 The Columbia Theatre stands as a testament to America’s love for movies and theatre in the 1920’s and 1930’s. The 1927 built, brick building has an elaborate facade of blue/white terra cotta tiles. The facade displays eclectic assortment of architectural details, including spiraled Byzantine columns, classical urns, friezes and capitals and busts of Greek goddesses. This theatre in its day was an elegant and exquisite delight… Today needs someone to restore it to its grandeur.

Thanks for the latest photo, Lost Memory. It’s heartrending to see such a handsome theatre shut down like that.

I think the first line of the introductory paragraph for the page is supposed to read “The Columbia Theatre stands as a testament to America’s love for the movies and theatre in the 1920’s and 1930’s.” It’s part of the text of the PDF Proposal for renovation of the Columbia and Arcade theaters, available at Paducah Main Street. (The PDF is essentially the same content as the web page, but of course you can make the photos a bit bigger.)

I’ve tried to find the year of the Art Moderne renovation but the closest I can come is an item in the June 21, 1952, issue of Boxoffice that said “The Columbia Amusement Company, Paducah, is doing extensive remodeling at its Columbia Theatre.” 1952 seems a bit late for the Skouras-esque swoops and swirls that were apparently appliqued to the original, restrained interior style (which looks Adamesque to my eye.) There might have been an earlier renovation, but if so Boxoffice isn’t telling me about it.

What I have found in Boxoffice is a few references to the Keiler family’s Columbia Amusement Company operating not only the Columbia, the Arcade, and the Kentucky Theatre, but also a house called the Rialto, currently not listed at Cinema Treasures. There was also one reference to an Orpheum Theatre operated by the Keilers at Paducah, but that might have been an aka for the missing Rialto.

My name is Joe i am looking for any information on the Columbia Theater in Paducah KY. My wife and I are making a proposal to the city of Paducah in restoration of the theater. I am looking for pictures of the interior from when it was in full working order. We are looking to restore the theater in full working order and as close to the same as it was on April 18, 1927. I am also looking for anyone who would like to lend a hand in the restoration of the theater. I can be contacted at or 618 841 3129

I just shot some pictures of the Colombia while I was in town on a photography trip over the Summer. Here’s a link to the first of the set on my Flickr page.

While looking for into on this theatre online, I also found think like to a video interview of a city employee who’s part of a team that may be working to renovate the building.

It’s odd since I planned my trips partly by using Cinema Treasures to see where theatres to photograph were located, but somehow I missed the Arcade. I’m afraid if they have done anything to that building, I didn’t notice it and didn’t realize it was there. Sorry.

Please visit www.thecolumbiaclub.org for more information as there have been many strides made to restore this art palace. It is very exciting.

To whom it may concern. My name is Mark Bass. I live in Dallas/Ft. Worth, TX. I was a Movie Projectionist at the Columbia and Arcade Theatres from 1977 – 1983. I also was a Movie Projectionist at the Paducah Drive In, in Lone Oak, during the.Summer of 1983. All of these theatres including The South Twin Drive In, located on Paducah’s South side, were owned by Jack Keiler, a very nice employer in which to work. Mr. Keiler’s father Leo, began the theatre business in Paducah, Ky. During my tenure at Columbia Amusement Co., my much older superiors told me that the Kentucky Theatre owned by the Keiler family, was also an elaborite theatre that riveled the Columbia Theatre in beauty. I was told that The Kentucky Theatre burned, and later the land was cleared for the errection of the downtown J.C. Penny Building. When the Columbia Theatre was “twinned” in the mid 70’s, dozens upon dozens of seats were removed from the back of the downstairs auditorium. This was to make room for a new Concession Stand and new, larger, rest rooms downtairs. Originally, the Columbia was.a vaudeville theatre (yes, the dressing rooms are still underneath the stage). The full-size stage is hidden by the huge Cinemascope shaped movie screen that was.added during the mid 50’s restoration of the Columbia. The advention of TV was hurting movie theatre attendance so badly, that Cinemascope (larger screen) was invented in an effort to bring lost customers back to the theatres. The Columbia originally did not have a Concession Stand. A tiny Concession Stand was added during the mid 50’s restoration. It was located in the .movie posters.viewing area, the area a customer saw once he or she entered the front doors (on the right). If one looks closely to the right, as soon as one enters (via the right entrance doors to the right of the box office, one can still faintly see on the dark paneling, where the letters “Snack Bar” used to be adhered. After turning the balcony into a second theatre, many.strange things were done during the remodel. For example, to light the beautiful red lamps that are concealed in the beautiful gold-guilded filagree above the entire screen in the main auditorium, the Movie Projectionist had to go flip a switch, hidden in a closet, in the Columbia Theatre. Just email me when the day comes, when someone wishes for those hidden red lamps to turn on! Does anyone wonder what the room and closet are for located in the Mezzanine area of the Columbia balcony? The closet was once a Phone Booth, complete with shutting door for privacy. The room off the upstairs Mezzanine, was the “on shift” Columbia Theatre Manager’s Office. There is a brass rail in the Columbia’s balcany (runs the width of the theatre). This rail seperated the “white” people from the “colored” people during the years of segregation. There was also a second Box Office in the alley between the Columbia & Arcade Theatres. This is where “colored” people had to buy their tickets, and they had to climb the highest Columbia fire escape steps to enter what was called the 2nd Balcany (the balcany behind the brass rail.

Mark Bass, I to worked for the Keilers and the Columbia, Arcade, South Twin and the forgotten pay parking lot behind where J.C. Penny’s was across the street. I believe we parked the cars and it was $0.35 per hour unless your ticket was validated at select stores for purchases. I worked at concessions and ticket taker at the South Twin. Steve & Jack Keiler were friends. 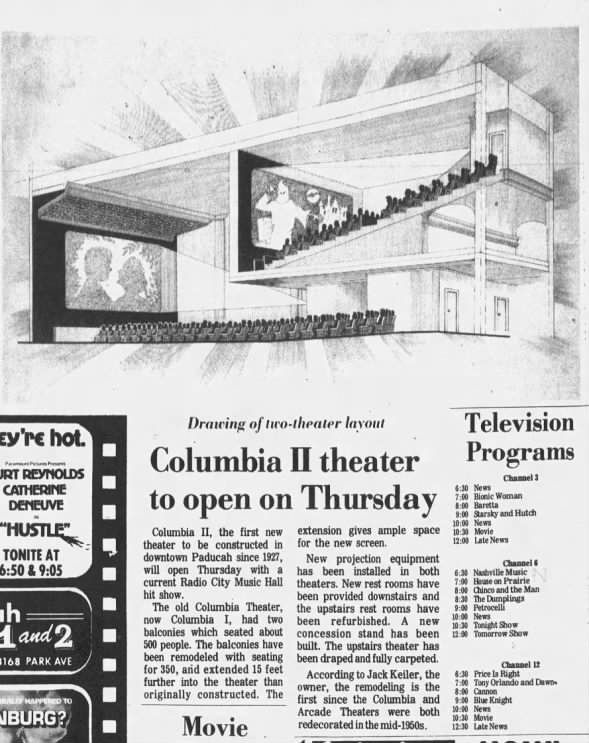