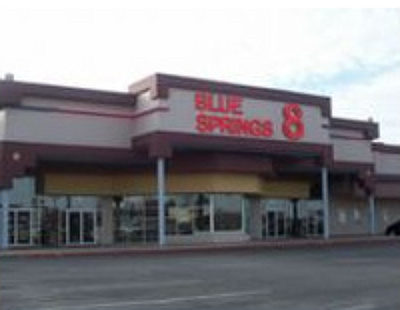 The Blue Springs Cinema 8 opened October 2, 1987 by Mid-America. It was taken over by AMC in 1989 and seated 2,650. The theatre has a wrap around front featuring a multicolor over hand. Colors along the front are burgundy, white, blue and gold trim. A long center entrance box office with doors to each side. The entrance to the theatre has a lot of glass where you can see clearly into the lobby.

The lobby is large an spacious and very colorful. A large central concession area with hallways too each side leading to the auditoriums.

It was taken back by Dickinson Theatres on March 15, 2002. The auditoriums are patterned in their own color schemes. Two of the large auditoriums are stadium seating style, but as well with all Dickinson theatres the theatres are well designed and the site line is great in all their theatres.

The theatre features Dolby stereo, DTS and Ultra Sound. The also have advance ticket purchasing and online tickets. All theatres are handicap accessible. It was closed by Dickinson Theatres in 2012, and was taken over by the Miller Circuit in 2013.

Some of the information on this post is wrong, to start off the theater was not originally opened or designed by Dickinson Theaters, I believe it was an independantly owned theater. I personally think it was in better condition when it was owned independantly, because now that it is under the control of Dickenson Theaters (which happened in the late 1990’s) they don’t put much money into fixing it up, or renovating any of the auditoriums, and that is because they put alot of their money into their nicer complexes like eastglen, westglen, and palazzo. By the way, there are not 4 stadium seating auditoriums, there are only 2.

This was opened by AMC, which sold it to Crown Cinemas, which became Wallace Theatre. It was later sold to Dickinson.

Please keep me updated on developments with this theatre. Thanks.

who is the landlord?

This theatre is no longer listed on Dickinson Theatre’s website.

This theatre is now closed.

This opened on October 2nd, 1987 by Mid America and taken over by AMC in 1989. other owners were Crown Cinemas, Wallace Theatre Corp., Dickinson and now Miller Theatres.