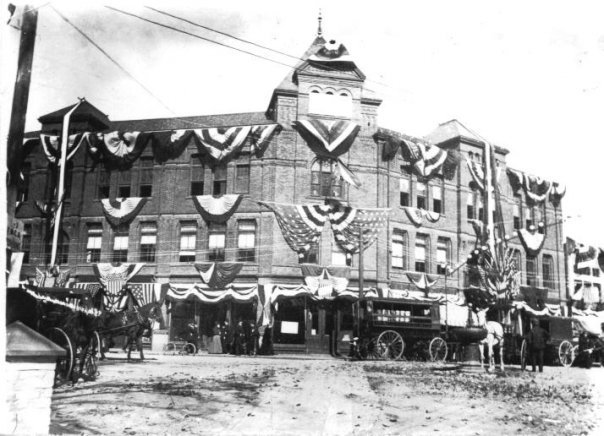 A lost theatre in the village center of Attleboro, Massachusetts. The Bates Opera House was opened prior to 1897. It later became the Bates Theatre was closed in 1952.

Just a tag info on Bates: i lived in Attleboro and worked @ the Union for many years from July 4 1976/ 1991. Only 9 then when i stated helping out, i recall alot of things Roxy Pichi talked about. How he started out and then he became the Assist Manager/Manager for the Bates til 1945 and in 1946 he transfered to operate the Union Theatre at age 22. Recalling alot of talk Roxy did as i grew up spending time in the Union Theatre with dreams of my own i know the Bates owned the Union The admissiont to the Bates was nothing like today a mere 10 cents lol and in 1946 it was just a quarter i know that Admission to the Union on Dec 23,1955 went to 65cents for adults and 30 cents for children only due to the Disneyrama (Walt Disney Cartoons)feel free to email me i my self have Managed 9 Theatre’s and three drive in’s now iam working for Disney wow!

The Bates' Opera House is listed under Attleboro, MA in the 1897-98 edition of Julius Cahn’s Official Theatrical Guide, an annual publication for roadshow producers and stage managers. It refers twice to the theatre as Bates', in the possesive, (pronounced “Bates-es”). The listing says that the theatre had about 1,000 seats, with a stage 43 feet deep, and a proscenium arch 30 feet wide and 27 feet high. It says the theatre was on the ground floor, and ticket prices ranged from 25 cents to $1; the Manager was J. G. Hutchinson. The house orchestra had 7 members, led by T. Link. There was apparently a Bates' Opera Cafe in or near the theatre. The population of Attleboro in 1897 was 8,000. There was also a Bates Opera House in Weymouth MA, in Weymouth Landing, right on the Weymouth-Braintree town line.

well it was wrong the theatre was located on the upper floor there two sets of stairs leading up that are still there wide granite stairs the inside was spectacular from what i have heard ,large ceiling with chandeliers. box office was on ground floor main entrance, concession at the head of the stair and then the stair leading in to the orchestra and opening night the tickets were set at a low .05cents til the late 1920 at which point you could get your self a drink and popcorn for .20 costing around .25 per person which then was a lot of money for most of the Jewelry city population

The Bates Opera House in Attleboro is listed in the 1927 Film Daily Yearbook as having 1000 seats and being open 6 days per week.

The Theatre Historical Society archive in Illinois has the MGM Theatre Report for the Bates Theatre. It gives the address as 4 Park Street. The theatre was in Fair condition and had been showing MGM product for 6 years (from 1935). There were 621 orchestra seats and 358 balcony seats, total: 979. Competing theaters were the Union in Attleboro, and the Darlton in Pawtucket RI. There is an exterior photo taken in May 1941.

First full length movie was “Birth of a Nation”? That was a foul racist pro-KKK propaganda film. How does that fit your liberal mindset?