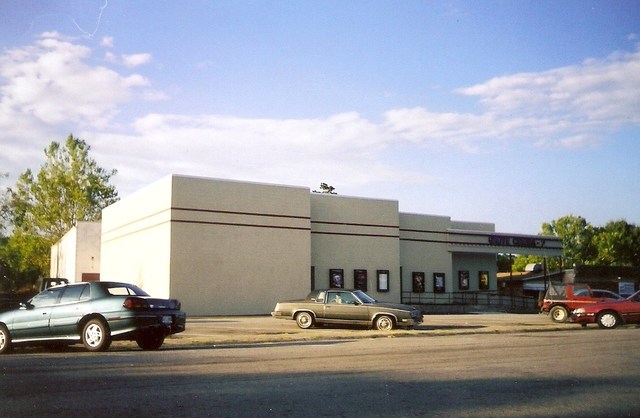 This theater was built opened September 28, 1944 with Eddie Bracken in “Hail the Conquering Hero”. Oak Ridge city was built by the government. I am in the process of researching the history of this theater as well as three others during that time. The cost in 1949 to watch a movie was 9 cents.

This is from Boxoffice Magazine, October 22, 1944: “OAK RIDGE, TENN— The Grove Theatre, newest and largest of the three motion picture houses here, has opened its doors. It is located in the western section and will serve also for concert and road attractions playing here. It will seat 1000 persons.”

The December, 1981, issue of Boxoffice mentions a Grove 1-2-3 Theatre in Oak Ridge, along with the Ridge Theatre, both being operated by the Greater Huntington Theatre Corporation. Does anyone know if this was the original Grove Theatre triplexed? There’s also a possibility that the Ridge Theatre was triplexed at a later date.

The website link given above takes you to the website for the High Places Church at the Grove, at the same address. The function should be changed to church.

The Grove Theater was built during the Manhattan Project, which founded Oak Ridge in the first place. It was converted into a three-screen cinema after the war, and remained that way until a major renovation turned it into a crappy generic multi-plex in the 1980s. Extensively remodeled, it is now the home of High Places Church in one auditorium. The other two original auditoriums have been combined into a single space and is used as a venue for concerts and live events.

Following is a link to the Flickr page for the American Museum of Science and Energy in Oak Ridge, showing the Grove, Center, Jefferson and Ridge Theaters in Oak Ridge, all built by the Army Corps of Engineers for the Manhattan Project, 1942-1945. Also, the Skyway Drive-In, circa 1960s.

Sept. 24 1967 NOW SHOWING JOHNNY YUMA . BORN LOSERS was the next picture to play.

The Grove Theater website is currently under construction and hopefully will help address many of these lingering questions. One item I am interested in knowing is when the original hardwood performance stage was ‘walled up’ into order to project movies against. The venue was a performance hall prior to becoming a theater, and violin virtuoso Isaac Stern once played on that stage during the war.

The original 1-2-3 theater arrangement is a little misleading. It was once large auditorium used for concerts, then later movies. (I think the films began toward the end of the war.) In the mid 1970’s, the auditorium was split into two screens and it is possible the old hardwood stage was walled up then, but I am still searching blueprints for an answer to that question. In 1979, they added a third screen, then as Oak Ridge Cinema Inc. was being bought out by Cinemark, four more screens were added but used for under one year. The building sat vacant for six years and was severely vandalized prior to the 2004 purchase by High Places.

Hopefully, we can have a link up here with photographs pre and post restoration very soon.

Waiting on the pictures!!!!

It appears that the Grove is still undergoing renovations but still providing a venue. Website: http://thegrovetheater.org/