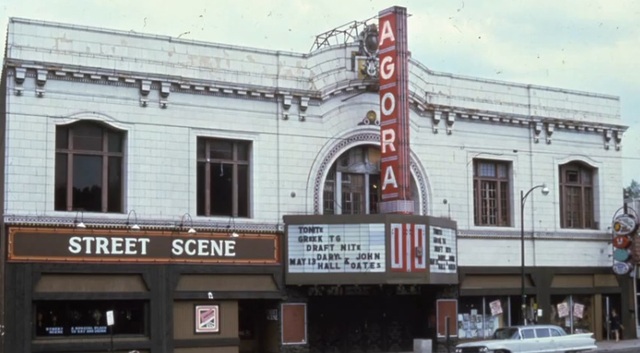 The former State Theater was located on N. High Street, across from Ohio State University. It was opened on December 21, 1921. I never saw a movie there as it was the Agora Nightclub in the 1970’s when I attended OSU, but I remember a lot of Greek columns and thought what a neat theater is once was. Most of the original decor is intact but painted over the last time I was there (years ago). There was a balcony that was closed off. It was still operating as a movie theatre in late-1969.

Following closure it became a rock music venue named Agora. Later by 1987 it was in use as the Newport Music Hall and nightclub.

JESUS CHRIST SUPERSTAR was first a recording released in 1970. It was incredibly popular when it came out and, because the album was so theatrical, there were many groups that just put on productions of it without any permission from the creators. It was some time later that the official versions started to appear. Androy51, your production was most likely in 1971.

The production was deemed illegal as it was not sanctioned by who ever owned the rights to it. Apparently money was to be paid to use the name. My memory of this is very sketchy and is why I am looking for any input.I just remember we were shut down before completing all scheduled performances. And, it was a blast doing it, my memory is at least clear on that. Thanks everyone for comments so far.

Working security for Agora Productions was fun for five years, indoors and when we had summertime rock concerts in towns like Steubbenville or the Aquapark near Dayton. Being on stage and walking through the crowd subjected me to billowing “walls” of marijuana…couldn’t help but “catch a buzz” just being in the area…and I didn’t smoke!!

I worked in the club starting fall of 1975. I remember Quality Crews would work the national acts. Around 1978 the place changed hands. Factory Productions started providing the PA.

It would be nice if someone posted details and pictures from the opening and early years of the theater. I have the original Moller theater organ console from the state installed in 1921 opes 3160. Maybe someone knows what happened to the pipe work from this instrument.

Androy – I worked a Super Trooper spotlight during the opening night of JC Superstar at the Agora – the whole crew were speeding our little brains out as I recall, lack of sleep. Jimmy Lynch (Tristram Shandy)joined their band and toured with them for a while, I believe. Movietime – the organ pipes were there in ‘71, I climbed around in the pipe chambers.

buckeyebanger – could you tell me what year this Agora photo is from? Hall and Oates played there in 72 or 73…but they were billed as “whole oats” at that time. Thanks!

Wasn’t this theater still in operation (as a movie theater) in early 1974? I could swear I passed them and they were showing Marco Ferreri’s wonderfully scandalous “The Grand Bouffe” at the time. As a high school sophomore taking a “walking tour” of Ohio State with the Latin Club, I was sooooo impressed.