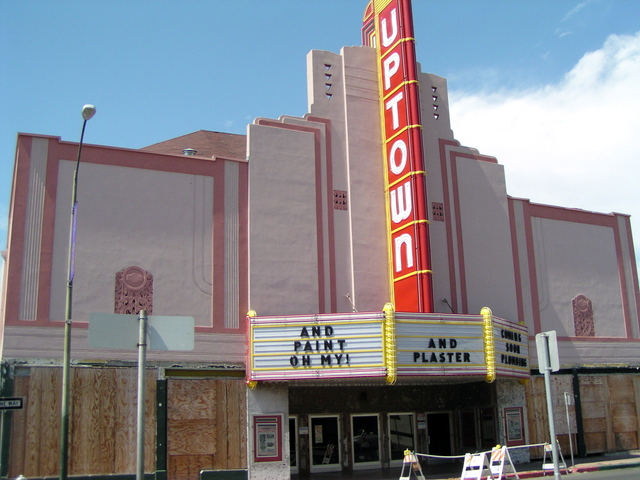 Work began in 2005 on a restoration/renovation project, and the auditorium was returned to a single space. In late-2009, restoration and renovation continued and it reopened in early-2010.

According to JamBase, the Uptown will be hosting a concert by retro band Big Bad Voodoo Daddy on May 14.

My Dad was the Manager from 1966-1976 I worked there from 1970-1975 the stories I could share, crazy times. Napa was a great place to live in those days, most of my friends worked there (you know who you are)also how about the Kay Von drivein, alot of good times. Glad to hear it’s reopening way too much history to let it it stay empty hope all goes well I plan on visiting my next time through.

Too bad there aren’t plans for films, at least occasionally. It would be a great venue for a WIne Country film festival. I really like it when these renovated theatres make films a part of their programming. Nothing like catching a flick (preferably a classic) with a large audience at an former movie palace such as at Oakland’s Paramount or San Jose’s California or Antioch’s El Campani to name three greater Bay Area examples.

Fond memories for me of seeing movies at the single screen Uptown when I lived in the Napa Valley 1959-1964. By the time it was converted to a four screens it was pretty much ruined. I look forward to seeing the restored Uptown in the near future.

My Uncle Lawrence Borg built the uptown in 1936. So glad to see that it is restored to its former glory. My uncle would be proud to see it still in spectacular condition

In 1933 Lawrence Borg became half owner of the Fox and State Theatres leases and business in Napa, Calfornia, and in 1935 Sole owner. In 1936 he built and began operation of the Uptown Theatre in Napa http://www.uptowntheatrenapa.com/history/ and in 1938 converted the State Theatre into the Napa Bowl, a bowling alley, which he operated for a year. He sold the Uptown, Fox and State leases to the Blumfield Theatres, San Francisco. He also built the Santa Rosa, California Bowling Alley in 1938 and operated it until 1940 when it was sold.

I grew up at the Uptown and someday will get around to writing some stories. The recent restoration is gorgeous but sadly the wonderful ceiling mural of topless ladies riding chariots has only been recreated quite small and is hidden by lighting bars unless you are in the front rows. At a recent high school reunion several people confirmed the original mural…we remembered if the movie was boring the ceiling was not! The first manager claimed there was no such mural so my guess is it was done n the late 1940s when a painter came through Northern California creating similar works in small town theaters.

This recent article in the Napa Register has some mistakes (like claiming the Fox becoming a bowling alley when it was actually the State per above and my own memory). But there are theaters mentioned here I never knew about. http://napavalleyregister.com/lifestyles/real-napa/columnists/rebecca-yerger/napa-s-old-movie-houses/article_565a63e6-4faa-11e1-a1f0-001871e3ce6c.html?mode=story

I do hope the Uptown operators will consider dong some films programs. Art films, classics and shows presented by the Napa Valley Film Festival. Wouldn’t it be grand to offer these on nights between live shows.

It seems strange that this theater closed in the late ‘80s. I could have sworn that I saw Ed Wood here in 1994. Though I was only 15, so my memory could be hazy.

Yesterday’s 6.0 earthquake in Napa, caused some damage to the Uptown. Photos show it being roped off, with reports from newspapers of damage to the exterior and to the interior. The extent of the damage is unknown, as there was no power in the building for a decent inspection.

There was cosmetic damage from the earthquake but the theater had been strengthened during it’s most recent renovation during the first decade of the 2000’s. The (Nov 2014) Napa Valley Register link with proscenium damage pic has the details: 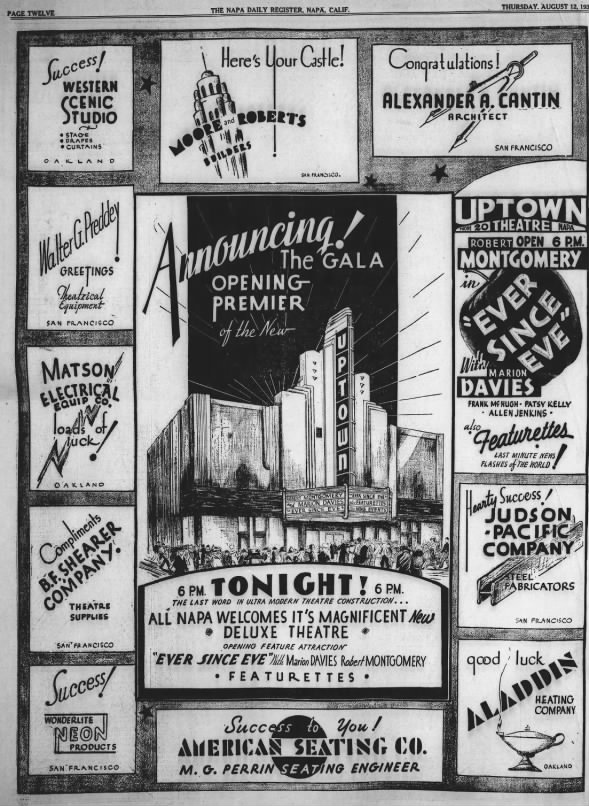