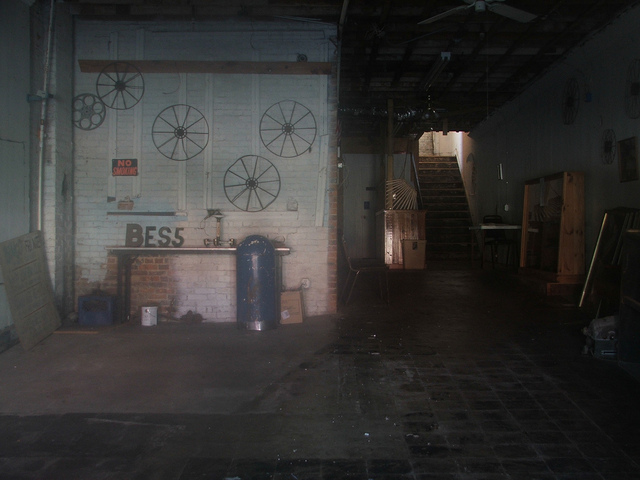 Built in 1938 with brick and steel, the Port Theatre is a unique Art Deco style building. It has withstood many hurricanes and although it has been usable for our business since 1996 (we conduct auctions in the building), it still could use some TLC and additional restoration. We spent three years getting it listed on the National Register of Historic Places (June of 2003 it was official) and everyone loves this building!

Located in the heart of downtown Port St. Joe, a block off Hwy 98 in the Panhandle of Florida, near some of the most pristine beaches in existence. This area, once called “The Forgotten Coast” is booming and our theatre is beginning to bloom. We thought we had it sold to someone who was going to complete restorations and open the building as a theatre, but things didn’t work out. Would love to talk to theatre enthusiasts who have an interest in owning a piece of history.

The Port Theatre was sold at auction in August 2007. The buyer didn’t state what plans he had for the building.

thank you, Lost Memory, for adding the above info on the Port Theatre. We are still trying to sell it! We have moved to Tennessee, so it is sitting empty now, not being used. We had regular auctions in it until recently. We would be willing to lease it, too, but it isn’t really in condition to use as movie theatre building as it is yet, unless someone had the equipment to bring in, etc.

If the status were to be changed, temporarily closed would be more appropriate. We will be doing a final auction in the building when we sell it, and if that isn’t soon then we will do one in the next couple months. We had a contract on this building in November of last year, but we couldn’t come to terms and agree enough to get to everyone signing. We do have a couple other interested buyers, keeping our fingers crossed! Good idea on a news item. I’ll give it some thought.

Yesterday, after very long negotiations over a two year period, including a written offer last November, the City of Port St. Joe backed off from buying this treasure, “until after the elections”. They had wanted to buy this gem to restore it more fully, and to use it to obtain grants for the downtown. The real estate market in Florida had a slump after Katrina, which didn’t help our goal to sell. We, the owners, currently live in Tennessee, and we have quit doing auctions in this Theatre. It is on the market, for sale by owner, at around half the last listed price. We need to sell, we want to sell, we are motivated to sell. Call Wade at 931-629-4080 for more information.

PS I can’t figure out how to change the status of this. clicking the status only takes me to a list of other theatres with their status.

This theatre has been reduced to less than half the price it was previously. The current price is 750,000. It was listed at 1.85 million at one point, and has had two offers on it since that time. Owners would carry an owner contract for part of the price! Call Wade at 931-629-4080. This theatre is ready for someone to complete renovations! The area is very supportive of the arts, too!

The Port Theatre In Port St. Joe Florida is going up for auction on August 2nd to the highest bidder. The acoustics in the Port Theatre are incredible! It was built acoustically RIGHT for concerts.
If you want additional information on the auction, feel free to call Higgenbotham Auctioneers, International, LLC 863-644-6681. Probably in about a week or two, there will be flyers going out on this auction. For detailed information about the theatre itself, you could call my husband, one of the owners, Wade Clark at 931-629-4080 and he could tell you detailed information about condition, size, etc. We bought the Port Theatre in 1995 and spent 12 years working on it, and doing a weekly auction in it, until late last year. It’s in the center of the downtown in a lovely Gulf Coast town.

Here is part of an August 2007 article from the News Herald:

About 60 people listened to an auctioneer sell the Port Theatre in Port St. Joe earlier this month. It was the final curtain for the historic building until its next reincarnation, but no one is saying what production that might be.

Apalachicola businessman Harry Arnold purchased the theater for $505,000 after a back-and-forth bidding spree against one other bidder. Port St. Joe businessman David Warriner was believed to be the other bidder. The structure has stood at 314 Reid Ave. in downtown Port St. Joe for 69 years, a literal shell of its former self for decades.

Although the theater fronts Reid Avenue, the manager’s apartment on the second floor of the building looks out over U.S. 98 and St. Joseph Bay. Wade and Paula Clark purchased the old building in 1995, holding auctions in the space for 11 years until they closed the doors in January and moved to Tennessee.

Built of brick and steel in 1938, the art deco-style theater was listed on the National Register of Historic Places in June 2003. The theater’s new owner would not comment after the auction as to what might be in store for the historic building.

Here’s a brief item from the January 21, 1939, issue of Boxoffice Magazine: “Port St. Joe, Fla.â€” The Port Theatre, which opened last June, reports good business at this point. The house seats 964 persons and is managed by Roy Williams. It is owned by R. E. Martin Jr., E. D. Martin and Hugh G. Martin. The same three also own a house at De Funiak Springs."

That’s the earliest mention of the Port I can find. I was hoping for something earlier that might give the name of the architect.

Several later mentions of the Port in various issue of Boxoffice are mostly trivial, though one from March 18, 1950, said that a cross had been burned in a vacant lot across from the theater, and the following day manager C.J. Brown received a threatening, anonymous note warning him not to show the racially-themed movie “Pinky” or to “…suffer the consequences.”

A June 28, 1965, item said “David Smith has acquired the Port Theatre at Port St. Joe, a former unit in the Martin circuit.” A December 19, 1965, item said that the Port had been closed by its owner, D. Rollyn Smith. A May 1, 1967 list of theaters reopened during 1966 included the Port. No word on how long Mr. Smith had kept the theater closed. After that, there are no more mentions of the Port that I can find.

From the 1940s a photo postcard view of Reid Avenue along with the Port Theatre in Port St. Joe.

A photo, probably from 1939 based on the film advertised on the poster: View link